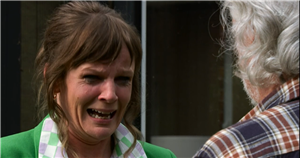 Coronation Street fans were left scratching their heads after Bridget Finch confessed to the murder of Charlie Stubbs after Stu Carpenter served 27 years behind bars.

During Wednesday’s visit to the Cobbles, viewers finally learnt who framed the loveable rogue for murder nearly thirty years ago.

The loving grandfather shared a sweet moment with his granddaughter where he taught her how to play the guitar.

But it all became too much for his daughter after he brutally explained what life was like for him behind bars for a crime he didn’t commit.

Towards the end of the episode, the brunette beauty revealed that it was actually she who killed the youngster where she hit her over the head by a bus stop filled with jealousy.

But fans couldn’t help but question how she managed to kill a grown woman on her own, as they worked out Bridget would have only been a student herself at the time of her death.

Viewers soon flooded to Twitter to share their confusion online, with many pointing out that she could have been as young as nine when the crime took place.

One user penned: “Didn’t Stu serve 27 years? His daughter can’t be more than 40 and Stu has been free a couple years. She must’ve been about 10 when she killed her #corrie.”

Another agreed: “I suppose she killed her when she was 9 therefore not criminally responsible #corrie.”

A third quipped: “When Bridget saw Stu and Charlie in the car, she did what any young kid would do and commit murder [cry laughing emoji] #Corrie.”

While another added: “She was a kid for crying out loud! Did she choke her to death on her my little pony collection? #Corrie”

Stu later addressed the confusion surrounding Bridget's age at the time of the murder, as he explained that she was "a teenager" at the time.

But this didn't help ease the confusion as viewers still struggled to work out how she got away with murder even with her mother's help.