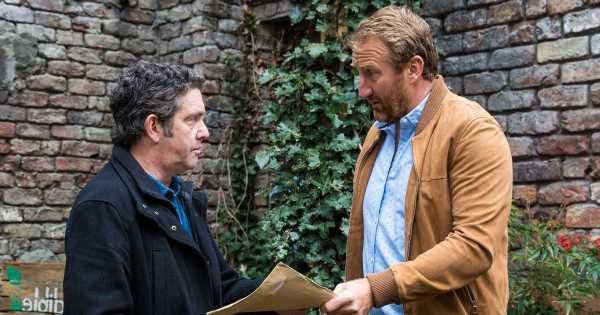 Only recently, Fiz had a blast from the past after a friend of Phill’s turned out to have been the prosecuting solicitor at her trial to which she came clean about the whole John Stape saga to Phill, who already knew.

In upcoming episodes, Tyrone gets suspicious when he sees Phil handing a large envelope to someone, when he's meant to be away from Weatherfield…

While in later scenes, Fiz's daughter Hope discovers something she shouldn’t on Phill’s laptop and gets upset. She leaps into the digger being used for work on their new house. Turning it on, Hope ends up smashing up Phill’s car.

With Phill and Fiz at loggerheads, Fiz takes the girls to stay with Tyrone – and the latter is hopeful it could become permanent. Later he and Phill fight – falling into wet cement!

However, Phill reveals he’s planning to propose. How will Fiz react when he pops the question in front of a disappointed Tyrone?

Teasing the upcoming storyline and Phill's secret, Fiz star Jennie, 38, revealed to press: "First of all, there is a giant digger involved and Phill's car. A crane and digger.

"You don't p**s my daughter off, we all know that. You don't mess with her. It's quite tame for Hope, really. She could have done worse! Joking aside, Fiz is really angry when she finds out what Phill is hiding. It's a pretty distressing thing that happens."

Jennie added: "The shine is definitely off. Things were already difficult after the recent Speed Daal date. Reality hit when Phill's mates started talking about John Stape and the past.

"Once reality hits, the shine has definitely been knocked off. But she's like: 'Oh no, this was the answer for me'. She doesn't want to bring the kids up on her own. Phill is the answer… but is he?"

For all your updates on Coronation Street, sign up to our daily OK! newsletter.