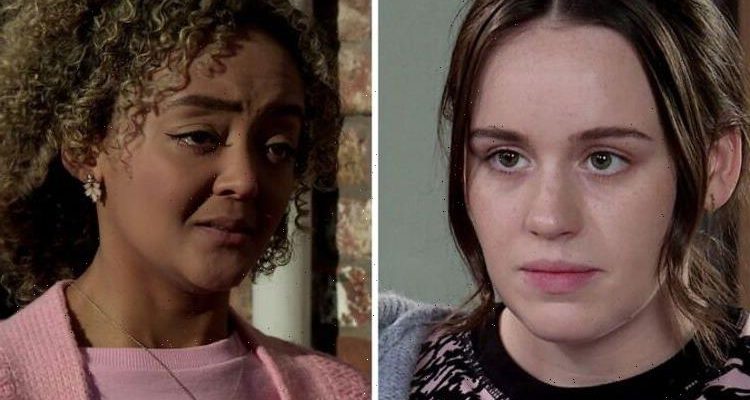 Coronation Street resident Emma (played by Alexandra Mardell) has been grappling with guilt ever since she and Faye (Ellie Leech) knocked over Ted Spear (Duggie Brown), which ultimately ended in his death. The pair were on their way back from a New Year’s Eve party when Faye knocked down Ted. Although he insisted he was fine, when Faye later went back to check on him, she found him dead in his armchair. Her actions put pressure on her romance with Craig (Colson Smith), who has since left the police force. Meanwhile, Emma has begun dating Ted’s grandson Jon Spear (Jordan Ford Silver) who she met at his funeral. As their relationship gets serious, will her guilt get the better of her and force her to admit what she and Faye did?

In upcoming scenes, Faye is struggling with her allergy to Peanut, and Craig resorts to asking Emma if she’ll walk the dog.

Whilst out, Beth Sunderland (Lisa George) bumps into Emma and Jon on a dog walk and when she introduces herself, the bar maid’s frozen in fear.

Later, Beth tells Craig she met Emma’s old school friend after bumping into her, but this makes the former police officer suspicious.

Wanting to know about the “school friend” Craig confronts Emma, convinced she’s secretly meeting Jon behind their back.

Has Craig worked out the truth about Emma’s secret meetings with Jon?

Emma denies his suspicions and Craig hopes it’s the truth as it could jeopardise his return to the police force.

Soon, Craig’s thrilled to receive an email confirming he can return to the police force and immediately tells Faye and Emma.

Meanwhile, Jon reveals to Emma that Ted left him £25k in his will, and he’s using the money to fund a new life in Australia.

They agree to make the most of the time they have left together and book into a hotel.

Over breakfast, a loved up Emma tells Jon she’ll call in sick so they can spend the day together too, but she lies to Craig and Faye she has spent the day with an old school friend.

Falling in love with Jon, Emma could form the idea of moving away to Australia with him, leaving Faye and Craig behind.

If she flees the cobbles, will Faye ultimately end up taking the fall for the death of Ted?

Will Emma be able to create a life with Jon, knowing what she has done to his grandfather?

Alexandra and ITV bosses have already confirmed Emma will be leaving the soap, which offers up the possibility of her leaving Faye behind.

Speaking about her time on the soap, she told The Sun: “Playing Emma, on the most iconic street there is, has been the best experience of my life.

“Four years have gone so fast, compared to other cast members, I still feel like a newbie, which makes my decision to leave all the more difficult.

“But I feel it’s the right time for me; I can’t thank everyone at Coronation Street enough for welcoming me and trusting me to tell so many wonderful and heartfelt ­stories.”

Alexandra joined the show in 2018 and was revealed as the secret daughter of Steve McDonald (Simon Gregson) and ex-girlfriend Fiona Middleton (Angela Griffin).

Coronation Street boss Iain MacLeod spoke highly of Alexandra and said: “Emma has found herself in a massive pickle, one which will cause her to wave goodbye to the cobbles. At least for now.

“Alexandra has been pure Corrie gold, and I wish her all the best.”

Coronation Street airs on ITV on Monday, Wednesday and Friday at 8pm.