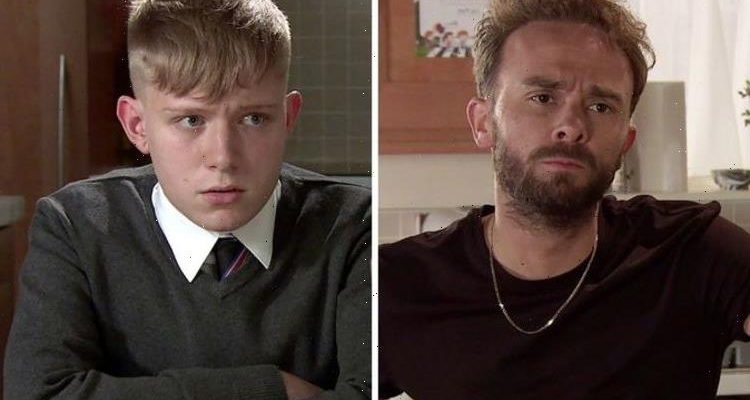 Corrie: David Platt discovers a sinkhole in his garden

Daniel Osbourne’s (played by Rob Mallard) teaching career has not been smooth sailing as he’s already facing being sacked after grabbing youngster Max Turner (Paddy Beaver) in Coronation Street. David (Jack Shepherd) will soon learn the truth about his son’s crimes and be faced with a tough decision as a parent. Will he decide to send his unruly son away to get help?

But when the troubled teenager denied it, dad David backed him up.

In upcoming scenes on the ITV soap, Max pushes his luck too far by trying to use Daniel’s bank card at the Corner Shop.

The card gets declined and Dev Alahan (Jimmi Harkishin) ends up warning David about the incident.

While David is stunned to realise that Max actually is a thief, he covers for him by acting as though he let Max borrow his card.

Is David doing the right thing by protecting Max when his insolence prevails?

Jack, who plays David, explained: “When David goes into Dev’s shop and Dev says that Max was in there earlier with a credit card that got declined, that is the moment that David realises that Max has lied.

“But instead of going ‘he’s got Daniel’s card’, David makes an excuse and tells Dev that it was his card that he gave to Max for a pizza.”

He told Digital Spy: “It’s all a bit suspicious and very bad parenting from David because he now knows that Max has nicked the wallet but he sticks up for him saying he hasn’t.

“David has already gone too far with the lie, so he can’t back down and he can’t retract it.

“He is now very worried that he is going to get caught out in this lie because he has let Max get away with it.

“Now David is in the wrong because if anyone finds out that David has let Max get away with nicking the wallet, it is just as bad.”

ack explained the character Max may end up taunting David about it not looking very good that he knew about his thieving.

The actor also shared why he thinks David may by finding it so difficult to discipline Max.

He said: “It could be a combination of things. David feels like Max has been through a lot in his childhood. But also this is the first time that Max has been playing up, so at first, David is quick to defend him because he believes that Max wouldn’t nick Daniel’s wallet.

“When David finds out he has, it is too embarrassing for David to say he has, so he hides it.

“David can also see a bit of himself in Max. When David used to play up and Gail [Platt] (Helen Worth) was at the end of her tether with him, it was always Audrey [Roberts] (Sue Nicholls) that used to see the good in David.

“It would be interesting to see it come full circle. For example, if Max played up and David loses his temper, it would be nice for Gail to be the one to see the good in him. That would be an interesting dynamic.”

If David can see a bit of himself within his son, will he hope that Max will grow out of acting up just as he was able to?

Coronation Street airs on ITV on Mondays, Wednesdays and Fridays.