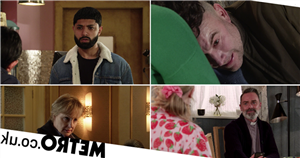 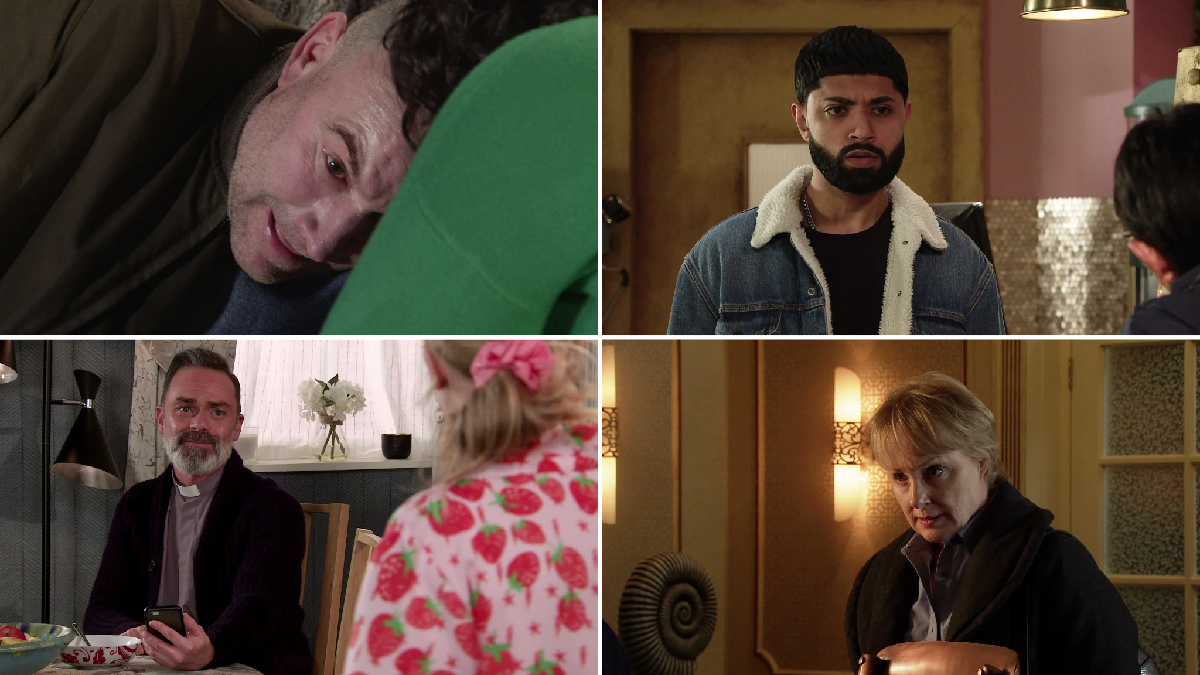 There’s literal heartbreak in Coronation Street next week as Tim Metcalfe (Joe Duttine) collapses after a high pressure week. As wife Sally (Sally Dynevor) finally discovers her husband’s condition, is she set to lose him?

Elsewhere, after upskirting videos spread, Amy Barlow (Elle Mulvaney) launches a campaign at the school and is further outraged by the proposed solution.

Will she manage to make an important change?

Tim is running out

An upset Sally is convinced that Tim is hiding something from her. Meanwhile Tim is urged by Peter to come clean but Tim pays George a visit to sort out his own funeral. When Eileen discovers what is going on Tim swears her to secrecy. Sally is further bemused when she sees Tim with Adam.

When Dev reveals that he donated £3k to Joseph’s appeal, Gemma and Bernie are genuinely touched.

At the bus stop, Amy tells Summer, Asha and Aadi that she’s done some digging and it would seem several other girls have been upskirted and harassed.  Summer begs her to drop it, but it’s clear Amy is on a mission. At the school, a crowd gathers to watch Amy spray painting the words ‘Stop Protecting Sex Offenders’ onto the side of a building.  Mrs Crawshaw summons Tracy and Amy to a meeting and explains that she has no choice but to suspend Amy for wilfully vandalising school property.

In the salon flat, a bored Craig watches the street through a set of binoculars. As Craig looks out of the window, and is shocked by what he sees. In Speed Daal, Alya tells Yasmeen she’s proud of her for donating the £30k to Joseph’s appeal.  Yasmeen refuses to be drawn and Alya’s left hurt.

Bernie calls in the shop and asks Dev to give her first refusal on any stock that he’s about to chuck. When Dev suggests they have a night out, Bernie pulls him in for a kiss.

When Amy reveals that she’s been suspended, Summer’s shocked.  Tracy blames Summer for failing to report the incident in the first place.  Summer meets up with Aadi, Asha and Amy in Speed Daal and shows them the open letter she’s written on Insta in support of Amy.

Yasmeen finds a note from Alya.  As she reads it, it’s clear she’s fighting her emotions.

Kevin advises Sally to speak to Tim rather than letting her imagination run away with her. Sally confronts Tim and asks him if he’s having an affair. He denies but when he refuses to hug her she finds his denial hard to believe and later puts a tracker on his phone.

Sally calls at No.13 and confides in Abi how she’s been tracking Tim, he’s currently at a hotel and she intends to confront him and his fancy piece. Spotting Tim in the hotel bar with a bottle of fizz and two glasses, Sally confronts him.

A despondent Alya tells Zeedan that Yasmeen has given half her shifts to agency staff as she can’t bear to work alongside her. Zeedan calls in Speed Daal to find Stu tearing his hair out.  When Stu reveals that the agency staff never showed up, Zeedan grabs an apron and sets to in the kitchen.

A reporter comes to do a story on Joseph’s disappearance but Bernie is humiliated when Dev quickly quotes the report straight when she refers to Dev as Bernie’s partner.

Over breakfast, Billy tells Summer she should check her phone as her open letter has gone viral and he’s extremely proud of her. Summer receives a message from Mrs Crawshaw summoning her to a meeting.  Amy insists she’ll go too.

When Craig strikes a £20 wager with Tyrone that he’s going to find the original owner of the wooden crutch, Faye’s heart sinks.

Skirting around the issue

Mrs Crawshaw thanks Summer for bringing the upskirting to her attention and assures the girls she’ll be talking to the governors about a policy change. But the girls are less than impressed when they realise the school expects girls to wear shirts under their skirts.

When Craig reveals that he’s sent the crutch to the lab to have it tested for fingerprints, Faye and Emma despair.

Shona confides in Abi how she’s noticed that Tim and Aggie have been spending quite a bit of time together recently.  Abi’s taken aback.

Despite Stu’s gratitude Yasmeen is still furious with Zeedan and makes it clear she wants him nowhere near the restaurant. Leanne offers Zeedan a job at the bistro but he’s not sure he can take it.

When Tim goes back to Aggie’s for a brew after his hospital appointment Sally spots his location on the tracker and starts to wonder if Shona’s theory about the two of them is correct. When she spots Aggie through the window putting a comforting arm round Tim she screams. Aggie ushers her inside. As Tim plucks up the courage to tell Sally the truth, he’s suddenly wracked with pain and collapses, clutching his chest.

Dev calls at No.5 with a food parcel.  Gemma’s delighted, but Chesney refuses his charity.  Suddenly the electricity goes off.  The social worker arrives and takes in the scene of chaos.

Mrs Crawshaw takes a seat in Daniel’s class but is shocked when no pupils turn up. They discover Amy and Summer are leading a protest against the upskirters. Daniel secretly phones the Gazette.

Carla calls at the Rovers hoping for lunch with Jenny but is miffed when she realises Jenny has a date with Leo. Craig tells Roy about the crutch with the initials THS and how he’s trying to trace the owner.  Roy reckons the crutch might belong to Trafford Health Services..

In the salon flat, an elated Craig taps away on his laptop and reveals the crutch belongs to Trafford Health Services. Emma masks her panic. In the Rovers, Leo introduces Jenny to his house mates, Faith and Myles, and Jenny is reminded once again of the age gap between them. When Leo suggests he’d like her to meet his parents, Jenny’s taken aback and promises to think about it.

Sally is stunned and hurt to discover that Tim is awaiting a triple heart bypass operation. It’s a double whammy for Faye who also arrives at the hospital angry that she didn’t know.

The reporter from the Gazette arrives at the protest, how will Mrs Crawshaw react.