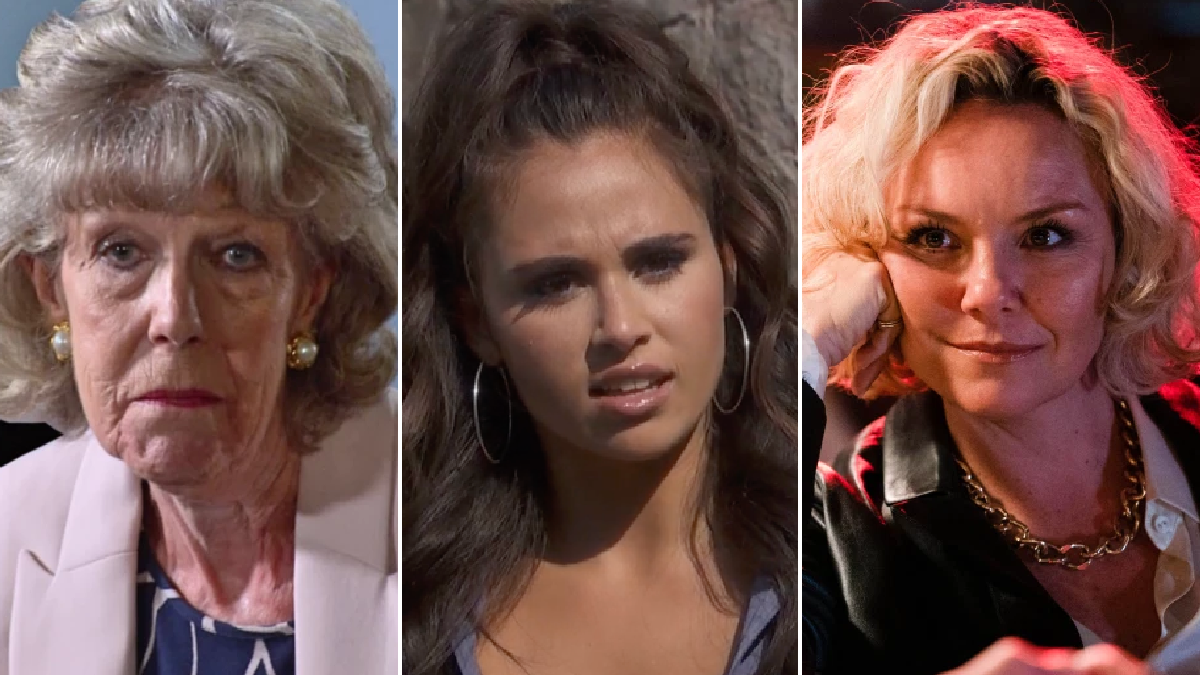 It’s a week of sadness for many of soap’s finest, as some hit rock bottom, while others say goodbye to their lifelong friends.

Charity Dingle, meanwhile, is left for dead in Emmerdale, after a violent attack in the Woolpack!

Hollyoaks’ Cher McQueen hits rock bottom, and is left feeling alone and isolated. Sylver (David Tag) finds out just how much his daughter needs him, but will it be too late?

If you’d like a little taster of everything the soaps have to offer this week, then check out our 10 must-see moments from the week ahead.

It’s the day of Norris’ funeral, and battle lines are drawn, as Norris gets his way one last time! Rita delivers a heartfelt eulogy, but things take a turn when Billy reads a letter left by Norris, who reveals that the paperboy outside the Cabin contains a secret! What’s more, he reveals that Rita used to have her hair done by Claudia, leaving Audrey livid!

Linda is adamant that Mick is the baby’s legal dad, but Rainie takes action, plastering flyers all over Walford stating that Max is the father! Mick takes matters into her own hands to protect Linda. Rainie and Stuart are subsequently left dumbfounded when an accusation is made. Stuart, therefore, threatens Mick for trying to jeopardise his family!

Charity is left to die in Emmerdale

Chas is not pleased when the Woolpack’s electrics fail, but little does she know someone has tampered with them. The pub is shut for the day, and while it’s closed, a hooded figure breaks in, forces open the till and pockets all the money. Charity catches the intruder red-handed, but she is knocked unconscious and left in a pool of blood.

One to watch: Tuesday September 21 at 7pm on ITV.

Cher realises she’s overstayed her welcome at Tom and Yazz’s, and decides to leave. Afterwards, she shares a moment with Sid, as both characters open up about feeling alone. Cher attempts to break into The Loft, but her plain fails, and things take a dangerous turn when she’s got nowhere left to go. Sylver, meanwhile, contemplates giving her another chance, but he’s forced to make a decision when Bobby shows him one of her tweets which appears to be a cry for help.

Zeedan rails at Ryan for cheating on Alya, but Alya turns the tables, reminding him he was nowhere to be seen during the Geoff ordeal. Zeedan is later attacked by two thugs, and when questioned about the assault, he implies Ryan was to blame! Ryan is horrified, and tears a strip of Zeedan, who comes clean to Alya and Yasmeen, revealing he is in trouble.

Janine tries to make amends with Scarlett, but Scarlett doesn’t forgive and forget all that easily! Kat encourages her to get a legitimate job, but she is rejected all over the Square. Things later heat up between Janine and Zack!

Gabby wants to elope with Jamie, suggesting they marry immediately! Jamie, however, wants to make one more play for Dawn. Will he succeed? Diane, meanwhile, discovers Gabby’s plan and begs her to see sense, but Gabby has made up her mind, waiting for Jamie on a lane outside the village. Jamie calls and tells her he’s on his way, but is he being honest?

One to watch: Thursday September 23 at 7pm on ITV.

Sid goes on a memorable date in Hollyoaks

Sid celebrates his results with Juliet, Yazz and Peri, but he’s feeling a bit anxious about his police application. However, he later opens the letter from the police, and he tells everyone the good news! The following day, Sid has more than a hangover to deal with, as he explains to Juliet that he lost his prosthetic leg last night! A memory of girl, however, might be able to give him the answers he needs. After a date that’s out of this world, Sid has a confession for Ste. The question is: just who has Sid been out with?

Freda offers to take Aled for a walk, but when Bernie and Chesney discuss the hassle of having to attend deaf groups and how they want Aled to talk properly and fit in, she’s upset. When Freda doesn’t return, Gemma is panicked, telling Roy she fears she’s taken Aled. Freda, meanwhile, is in the community centre with Aled, showing him a website dedicated to successful deaf people. Gemma does her best to get through to her, but Freda refuses to hand Aled over!

Dana is attacked in EastEnders

Bobby, Dana, Waseem, Iqra and Kioni are handing out flyers for support of the new mosque. Dana notices a group of men approaching who antagonise the group with racial slurs. Bobby professes his love for Dana, telling Harvey that he will protect her. Bobby, Dana, Kioni and Iqra see the offensive men from earlier and they’re cornered. They physically assault Dana while Bobby watches on, helpless.