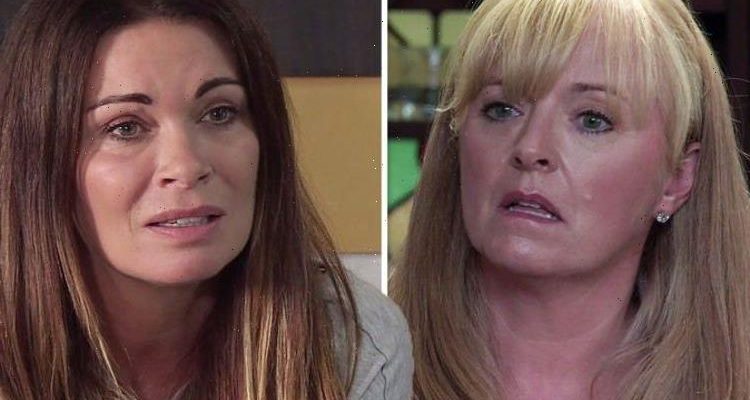 Johnny Connor (played by Richard Hawley) tragically lost his life in Friday’s instalment of Coronation Street after bravely saving Jenny Connor (Sally Ann Matthews) who had become trapped underground when the sinkhole collapsed. Carla Connor (Alison King) was understandably traumatised by the news while Harvey Gaskell (Will Mellor) and Natasha Blakeman’s (Rachel Leskovac) lives were also hanging in the balance. Will ITV soap fans be faced with the deaths of two more characters as Carla and Jenny flee in the wake of Johnny’s death?

He set about making his way back to the cobbles and shot Natasha believing her to be Leanne Battersby (Jane Danson) after sneaking into the latter’s flat.

Meanwhile, Johnny followed Jenny into the sinkhole in an attempt to rescue her.

However, the pair were left stranded underneath a manhole when the water in the tunnel began to rise.

Jenny observed: “The water can’t get up here and if it does well they’ll be here by then.”

“I thought I was the optimist,” Johnny teased.

“I’m giving it a go how am I doing? Johnny let’s keep talking I don’t like it when it’s quiet,” she urged.

He replied: “I’m sorry,” before she hit back: “No don’t apologise just keep talking.

“Tell me what were you thinking being the action man leaping down the hole to my rescue?”

“I didn’t think much I just did it,” he remarked.

“Because you want to be more than just mates with me don’t you,” she reasoned. “I know it’s quite a conversation but you can’t keep quiet now so come on spit it out.”

Avoiding her question, he said: “God only knows how old this drain is.”

Johnny apologised for the breakdown of his marriage with Jenny as he opened up on the suicide of his son Aidan Connor (Shayne Ward).

“It all changed after [Aidan] I’m not making excuses but it’s like after that my life stopped nothing made sense,” he shared.

“I don’t know everything after that has been all wrong I’ve tried but I don’t think I’ll ever get over it.”

“No that sounds like you’re giving up and you’re not allowed to do that,” Jenny urged.

Impatient with the search team efforts, Shona Platt (Julia Goulding) jumped down a nearby manhole.

Once down there she passed a rope over to Jenny and pulled her through.

Johnny struggled to keep afloat and was swept away in the sinkhole but not before declaring his love for Jenny.

Shona and Jenny made it to safety but Carla was left heartbroken when she realised her father had died.

Will Carla and Jenny decide to leave Weatherfield as they struggle to cope with Johnny’s death?

Meanwhile, Leanne was held at gunpoint by Harvey and ordered to drive her car through the cobbles.

After declaring she was no longer scared of him, Leanne purposely crashed the car leaving Harvey’s life hanging in the balance.

Although an ambulance was able to reach Natasha, will she survive the gunshot or will viewers say goodbye to both her and Harvey for good?

Coronation Street airs on ITV on Mondays, Wednesdays and Fridays at 7.30pm.