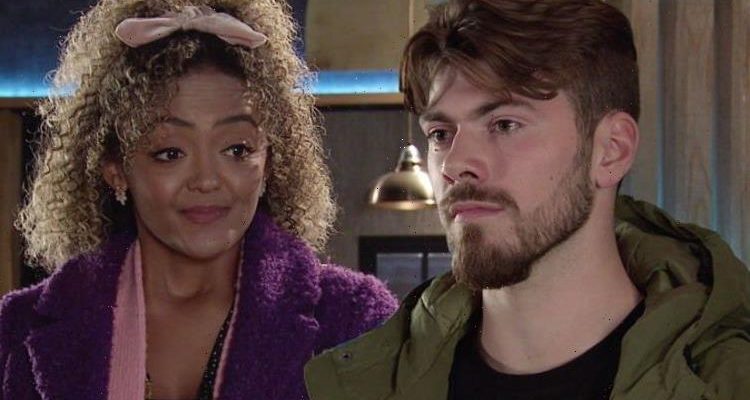 In recent weeks, Curtis (played by Sam Retford) has been acting like Prince Charming. After proposing to Emma (Alexandra Mardell), the hairdresser is excited for their future together and is busy planning their dream wedding. However, when Emma decides to contact Curtis’ family to invite them to their nuptials, the doctor snaps at his wife-to-be. Could the Coronation Street newcomer be about to show a much darker side?

Curtis informs them the wedding will be a small affair as he doesn’t get on with his family and his friends all live abroad.

He goes on to tell Emma his medical treatment will be expensive so they will have to scale back the wedding costs.

But Emma is determined to make their wedding the best day and tells father Steve McDonald (Simon Gregson) she plans to surprise Curtis by inviting his family to the wedding.

Unfortunately, Curtis is far from happy with Emma when he learns of her plan.

Things go from bad to worse when Emma tells Aggie Bailey (Lorna Laidlaw) Curtis has dropped out of medical school.

Aggie quizzes Curtis over why he decided to give up on his dreams but he brushes her off insisting he is more concerned with his health.

Curtis heads in to see the specialist and later tells Emma although his condition is serious, they are confident it can be managed.

However, when they get back to Weatherfield, Curtis’ father Neville (Mark Cameron) is waiting for them.

Emma is gobsmacked to meet Neville as she believed Curtis’ father was dead.

Curtis quickly rushes to cover his lies by telling Emma he is really his stepfather.

Neville is devastated by Curtis’ lie but goes along with it so as not to annoy his son further.

Emma then goes on to tell Curtis she wants to contact his mother and explain how ill he is.

The hairdresser and barmaid is confident she will want to be at the wedding if she knew how sick he has been.

But instead, Emma pushes Curtis over the edge as he snaps at her for interfering and meddling with his family.

Fans have only ever seen Curtis acting as a good guy so could he be about to show a much darker side?

He could attack Emma as he expresses how angry and hurt he is about her betrayal when he insisted he didn’t want her contacting his family.

Emma recently accepted Curtis’ proposal and has been by his side for months as he battles his mysterious illness.

Will she think Curtis’ attack is a one-off and become trapped in a marriage to an abusive husband? Or will she realise something more sinister is going on and dig deeper into Curtis’ past?