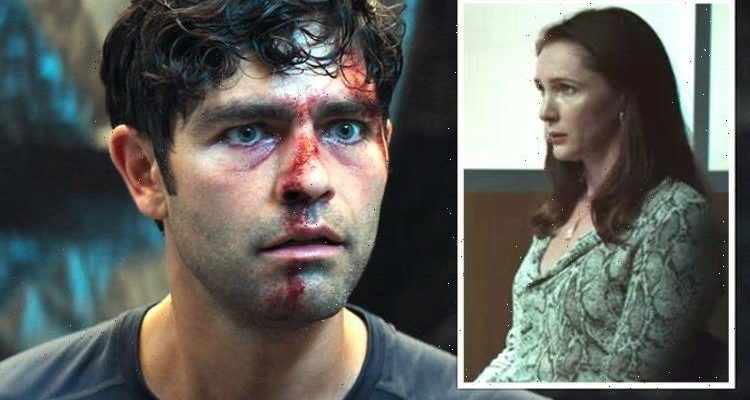 Clickbait is on Netflix now and the top-10 psychological whodunnit series has been messing with viewers’ minds. They are determined to find out what happened to Nick Brewer (played by Adrian Grenier) as more secrets about his past are revealed. One of the women caught up in the mystery is Emma Beesley (Jessie Collins), but what happened to her?

What happened to Emma Beesley in Clickbait?

Emma Beesley was introduced in episode three of the series, titled The Wife, and it continued the story through Sophie Brewer’s (Betty Gabriel) perspective.

Viewers found out Sophie had been having an affair with one of her colleagues, and it caused a fallout between Sophie and Nick.

The affair gave the police a reason to believe the man Sophie had been sleeping with had a motive to kill Nick.

However, it was later revealed that Nick had been seemingly cheating on Sophie way before her affair.

He had been speaking to Emma on a dating site, using the name Danny Walters.

Emma was the leading light in the following episode, titled The Mistress, as she was questioned by police.

Through a series of flashbacks, viewers saw Emma find out that Nick was married and she wanted to help Sophie get closure.

She tracked the Brewers down and even went to Nick’s place of work to find out more about him.

However, someone else did not want Emma to reveal too much and they attempted to veer her off the road.

As a result, she ended up in hospital and was told Nick had been using three other profiles on different dating sites.

Emma was heartbroken and she really believed Nick was her one true love.

Feeling betrayed, she set fire to a canvas painting of him and seemed vengeful.

She was not seen again until towards the end of the series when Nick’s son Ethan (Cameron Engels) was keen to find out more about his dad’s affairs.

He called Emma and asked if she had ever met his dad in real life, and at first, she was adamant she had.

However, she then admitted to lying and explained how they had only ever spoken on the phone.

She got a shock when Ethan played a voice clip and asked if it was the same voice she had heard on the phone.

A gobsmacked Emma said it was not the same person, meaning she had been catfished all along.

She played a pivotal role in clearing Nick’s name as someone had obviously stolen his identity to pose as him.

In the series finale, it was revealed in a shocking twist that it was Nick’s colleague Dawn Gleed (Becca Lish) that caused his demise.

Bored with her own life and desperate for attention, the married receptionist posed as Nick on dating sites.

When her husband Ed (Wally Dunn) found out, he was not happy and Nick soon figured out what she was up to.

When Nick tried to threaten Dawn, Ed hit him over the head with a hammer and killed him.

Not much is known about what happened to Emma after the truth was revealed, but it is likely she returned to LA.

Having got the answer she desperately wanted, she had no other reason to be involved with the Brewers.

She was not seen at Nick’s funeral, but she may have been invited by his sister Pia (Zoe Kazan).

Clickbait is available to watch on Netflix now.