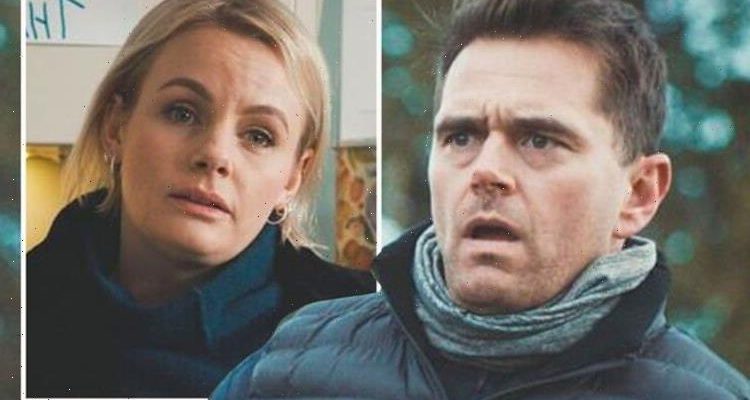 Chrissie (played by Lauren Crace) has been a regular face on Casualty over the past few months as she struck up a romance with fellow paramedic, Iain (Michael Stevenson). The relative newcomer to the BBC medical drama is petrified something is going to happen to her partner and she has found it increasingly difficult to contemplate him putting himself in harm’s way. However, when Iain decides to ignore her pleas in upcoming scenes on the television drama, he could force her to pack up her bags and leave Holby City for good.

The drama begins as Chrissie discovers Iain has been hiding a map of all the farms in the local area where modern-day slavery could be happening.

This is a storyline which began a few weeks ago when the paramedic found a man in the water and discovered he had come into the country in the back of a lorry.

Believing Iain could be in serious danger, Chrissie asked him not to pursue a lead on this and she is devastated to learn he didn’t listen to her.

Wanting him to be safe, she reports her other half to his boss, Jan Jennings (Di Botcher), as she thinks this could make him stop.

However, it’s not too long before Jan is offering up some information Iain needs to complete his mission to find the base of modern-day slavery.

This comes when Jan is called out to a farm to attend to a patient called Minnie, whose partner explained it has been difficult to keep things running there.

Although he is keen to sell up shop, Minnie is reluctant to as she promised her father she would keep it in the family when she inherited it.

As they continue to bicker, the patient’s partner comments on how well their neighbour’s farm is doing, considering how many workers they have and would need to pay.

Knowing this could be what Iain is looking for, Jan calls him and the paramedic soon rushes to the scene where he makes a discovery.

They brought in my wifey

Ignoring Chrissie and heading to the farm, Iain is escorted off the premises by some men who clearly don’t want him there.

As he’s leaving, he notices a young woman is in the back of a van which is being driven onto the farm and he decides he needs to investigate further.

His lead takes him inside a massive grain silo and when he ventures inside, he is horrified to realise the door has been closed behind him.

Suddenly, it becomes a battle to save his life as he tries to breathe within the grain which is continuing to pile up.

Luckily, he manages to call Chrissie to come and find him and when she arrives, she pulls her partner to safety.

Just as Chrissie does this, the National Crime Agency arrive and stops all production on the farm as they carry out their investigation.

As Iain is still distracted by the matter at hand, he doesn’t realise how furious his partner is with him or how panicked she is.

When the day finally ends, Iain is ready to go home but he is confronted by a distraught Chrissie who has some news for him.

The paramedic gives her partner back his house keys and tells him it is best if they break up as she can’t sit and wait for him to put himself in danger again.

Iain doesn’t take this seriously as he believes it to be a joke but Chrissie tells him this is the truth.

The paramedic is left heartbroken that his mission has led to the end of his relationship but he carries on regardless of the consequences.

Unfortunately, Chrissie breaking up with Iain might not be enough distance between the two as she will continue to worry about him.

Knowing she needs to get as far away from Holby as possible, Chrissie could decide to begin a new chapter of her life abroad.

This way, she would be able to cut all contact with Iain and any thoughts of him getting hurt would soon dissipate.

But knowing she could be the love of his life, will Iain wake up and realise he is making a huge mistake by losing Chrissie?

In real life, the actors who play Chrissie and Iain, Lauren and Michael respectively, are a couple and the latter has spoken out about working with his other half.

The actor explained: “They want a new love interest for Iain and they racked their brains with who they could possibly cast to do that.

“So guess who they brought in? My wifey.

“With us all still filming at two-metre distances, putting us two together means they don’t have to put us into bubbles because we’re already in a bubble and we can get close and do, sort of, more intimate scenes.”

Casualty continues tonight at 8:35pm on BBC One.