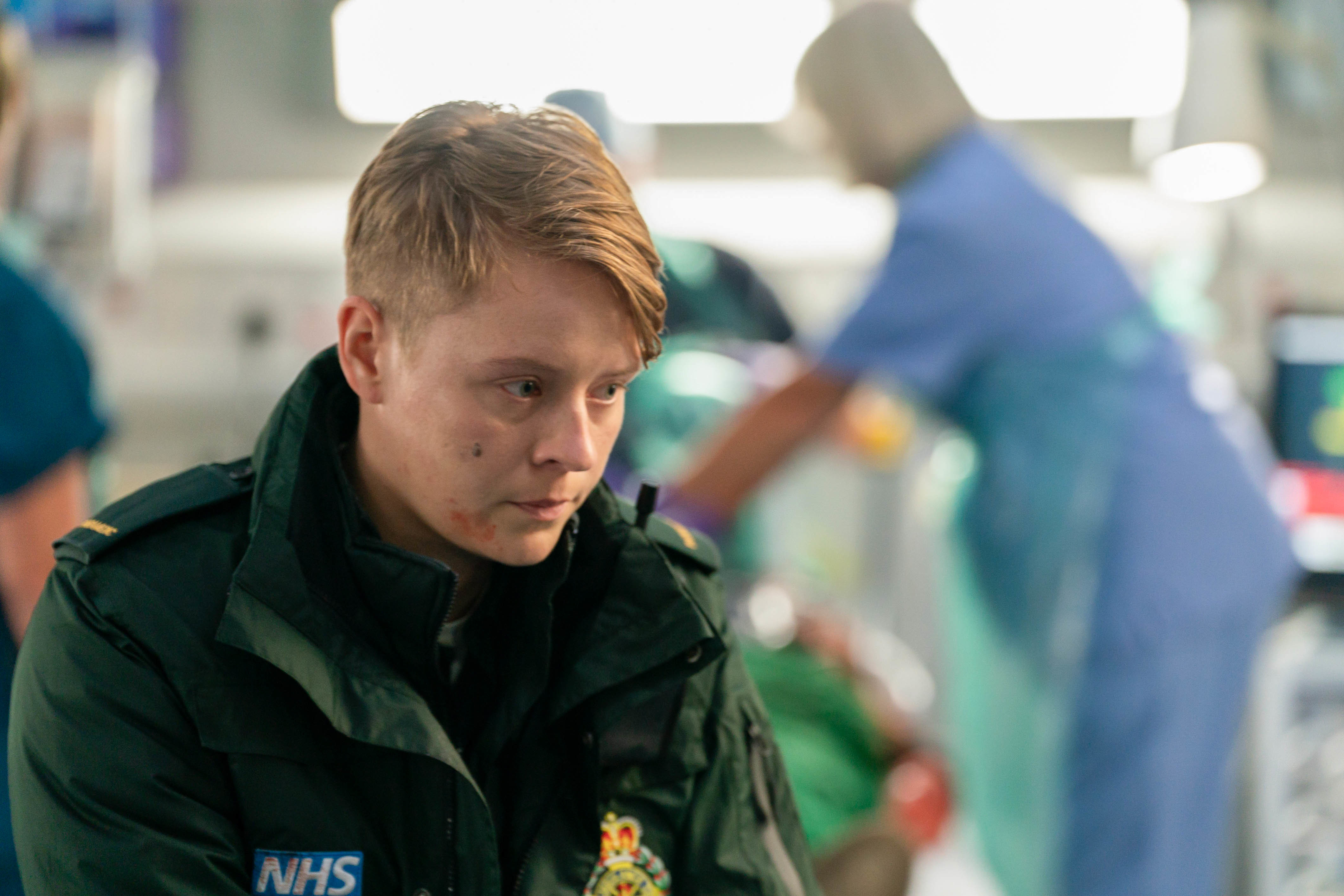 Casualty is well know for being ambitious and innovative, and next week will see an episode like no other as the cast have been left to completely improvise their dialogues and actions.

Arin Smethurst, best known as Sah Brockner in the BBC show, admits that is was a scary prospect to take on the challenge of the episode, which focuses on the pressures and situations faced by the core paramedic group.

The instalment will see Sah, along with their colleagues Jan, Iain and Teddy, will be seen attending numerous calls, thinking on their feet as they battle to save lives, face abuse from members of the public and patients and come under the shadow of targets and assessments.

Arin has now explained to us exactly how the episode works, their reaction when told what was in store, what the episode contains and the long term consequences, the scene that they had to take a five minute breather from and their admiration and awe of paramedics in real life.

Arin: It was so cool. It was very different and it was very daunting and very stressful. It was stressful like when a workout hurts, but it’s a good hurt. This is good pain – it’s going to be worth it when it’s done! It was great.

I haven’t done loads of improv before so I was the least experienced with improv out of the paramedics. Luckily I was with Di Botcher most of the time and she’s brilliant and she’s a very confident performer and a confident improviser so I was supported, for sure.

Was it all improvised? How much were you given freedom with?

The script was written just in kind of synopses of scenes. It was just like, this is what’s happening, this is the mood – go. What the characters were thinking and feeling in individual moments was left up to us. It was literally like this is the practical order of the scene, but otherwise carry on.

And we had medical professionals on hand to say this is the terminology we’d use, this is the order we’d do things in, so they’d teach us how to do the medical stuff but once we were in there they were like, ‘We’re not holding your hand. Go.’ So it wasn’t choreographed or anything, we were left to just do it.

Were you daunted when this was first pitched to you?

The executive producer at the time called me and she was like, ‘How do you feel about an improv episode? We want to do a paramedic special improv episode.’ I was like, ‘Sure!’ and then put the phone down and went, ‘Oh no.’ [Laughs]

We weren’t by ourselves, everybody was supporting us, everybody’s learning something. Camera operators, focus pullers, the ADs were all learning. Improvising camera and focus pulling also must have been wild. It was a team effort, for sure.

Do you feel that the success of what came across on screen was part of the bond you have as actors?

I think so. I was with Di Botcher a lot and up till a couple of episodes before I had mostly been with either Milo or Michael in a paramedic pair. So our journey as colleagues kind of reflected their journey as characters.

Not in the stressful sense but in the sense of learning how to do it and getting to know each other better. But we all have become a tight-knit group of four for sure. Being a paramedic episode, I think it really helped that it was focused on the four of us who already knew each other really well.

I think it would have been much harder to do an improvised episode with people you don’t know. We could leave space for each other where we knew someone was going to speak up. You could see people’s body language and their habitual mannerisms and stuff, so that was quite cool because we know each other well enough to do that now.

The situation for paramedics and the NHS is getting more and more stressful. Do you think it’s important to get that message across in the right way?

It was great to do improv because there were times we didn’t know – because we had amazing guest artists who were amazing improvisers – and we didn’t know some of the time how they were going to react. So we kind of go, ‘This is the thing, we’re paramedics and we’re here for this’ and they’d go ‘This is what’s happening’ in a way we might not have expected.

We’d have to react in that way and it made it more authentic because it felt like we were reacting in a way a paramedic would. We had paramedics on set who were saying ‘This is how we would deal with this kind of patient or this kind of family member.’

There’s a very stressful CPR scene. It’s hard to watch and it was hard to shoot because we didn’t know how this family member of the patient was going to react.

She reacted in such a strong way, that was the first time in Casualty where I’ve had to take five after a take because it was so much. It was the unpredictability of it that made it more real for us, I think. And also the guest artists being amazing.

There are scenes where the paramedics are getting shouted at. Was that intimidating?

There was definitely a point where I think this patient’s wife was saying, ‘You’re useless – get out.’ At that point I was just, ‘Time to go!’ and stood up and went. Even then, we as improvisors kind of knew what we were going into.

How they would deal with this difficult family member who may lash out as a result of something going badly – they had an answer for everything and we were like, ‘Wow, you’ve seen some stuff because you know what’s going to happen in all of these situations.’

For us all, the respect for paramedics is huge. All the time I feel humbled and entirely unworthy. People message me and stuff on Instagram and a few paramedics and medics have said, ‘This is great. Thank you for telling an authentic paramedic story.’

And like, you guys are doing it, I’m just pretending, I’m just a puppet. But you’re so welcome. I’m honoured. The real paramedics on set, the fact that they gave us more advice as to how emotionally and socially we’d be dealing with someone than they did medically really goes to show how tough they have it mentally and emotionally.

Obviously the medicine is hard and it’s tough and dealing with these emergency situations is really rough for people. But most of it is dealing with people and how they’re responding to you. It’s wild.

The episode deals with several guest characters and situations but focuses strongly on the four paramedics. Would you say it’s an intense episode for the paramedics and one where they’re challenged to the core?

For sure. It spans four days. Usually an episode will span one day but this one’s four days. Even for professional paramedics these four days were a lot. It was non-stop.

There’s a lot of queuing in ambulances to get into the ED in the first place, so that’s the only time you’re waiting but even then you’re monitoring your patient, checking what changes are going on. So mentally you’re switched on all the time. It’s rough.

It’s a powerful episode and it also progresses the characters’ storylines, with some things happening that might have a longer-lasting impact beyond the end of the episode. Is that fair to say?

That was episode 12, so from episode 13 onwards I feel for my character, there’s a point where Sah takes charge of a really intense situation. I think that was the button-press, the switch was flicked into Sah becoming fully-fledged, no longer a newbie, no longer a student, they’re in it, they’re doing it, they’re supporting their team-mate.

From that improv episode onwards that continues for Sah. Sah and Jan’s relationship develops even further.

They’re already quite close with Teddy and Iain. Sah and Jan get a bit closer/further away and there’s a bit of a push/pull situation and it’s now starting to explore the character now that they’re comfortable as a paramedic. It’s like ok, we’re taking it to the next level now.

How are you enjoying playing Sah?

It’s only partly sunk in that they’re the first regular trans character on the show. It’s great because the writers don’t make a big deal of that because it’s not all they are. It’s part of them but they’re also these hundreds of other things, which is great.

So I’m really excited to explore that and their journey as a trans person. Whether we do that or not we shall see – no spoilers. But I’m still really excited for where they’re going to go.