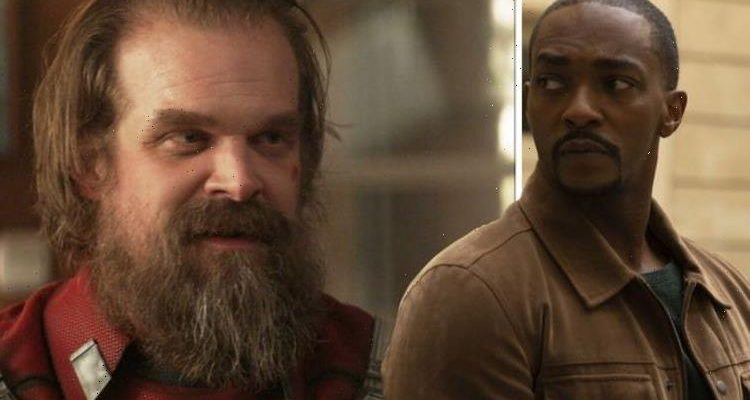 Sam Wilson (played by Anthony Mackie) has only been Captain America for a few months, but he has already got a few bad guys lining up to fight him. Marvel Studios executive Feige recently spoke out about Cap’s future, and how it could connect to the recently released Black Widow.

Feige recently held a Q&A session on the official Marvel Studios Twitter account where he was bombarded with a number of questions about Natasha Romanoff’s first solo movie.

During the chat, he was asked: “Will we ever see the return of Red Guardian? #BlackWidowWatchParty.”

The exec replied: “I certainly want too. -KF #BlackWidowWatchParty.” (sic)

That wasn’t enough for the insatiable fans, however, as they began prodding him with further questions about the connection between Red Guardian (David Harbour) and Captain America.

What do you think? Should Captain America battle Red Guardian? Join the debate in the comments section here

One fan asked Feige: “Are we ever going to see a showdown between Sam Wilson’s Captain America and Alexei’s Red Guardian?”

He responded: “I’d like to see that.. how about you guys? @AnthonyMackie @DavidKHarbour -KF #BlackWidowWatchParty.”

Captain America has previously gone head-to-head with warriors from other countries, such as the French Batroc (Georges St-Pierre), Germany’s Red Skull (Hugo Weaving) and the British Flag-Smasher (Erin Kellyman).

In the comic book source material Cap has also gone up against Red Guardian – his equivalent from Russia.

Also during the events of Black Widow, Red Guardian himself boasted about having already fought Captain America in the 1980s.

While this story was most likely untrue, it would still be exciting to see him take on the new actor under the mantle.

Even more interesting is the fact that Sam Wilson does not have any super-soldier serum in his body, meaning he would be extremely outmatched if he were to take on Red Guardian.

Despite this, Captain America is not one to step down from a fight, so he could stand a chance.

The Falcon and The Winter Soldier: Disney+ release new trailer

Red Guardian’s return could be more likely than originally anticipated after Harbour spoke candidly about his character’s future in the MCU.

In an interview with Variety, the Stranger Things actor was asked if he would return, to which he replied: “They don’t let you say these things!

“I love the character. There’s so many things you could do with him, right? There’s this gap of 25 years where we don’t know who he was, his version of events as opposed to the actual version of events, and what happens to him after this movie.”

Harbour continued: “And why isn’t he fighting Thanos? Where is he in that time? What happens then?

“When [Natasha] dies, what happens then? I mean, it’s very interesting to me and I hope that there is interest on other levels and maybe we’ll see some more.”

Captain America will next be seen in his own solo film, which has not yet been given a release date.

Black Widow is out in cinemas now, and available on Disney Plus with Premier Access.