"Where this started was: I read a report on the Thai fishing industry," says Australian filmmaker Rodd Rathjen. "I think from the Environmental Justice Foundation; their reports are really elaborate and quite specific and they had interviews with survivors. That was the beginning of my understanding. I felt guilty because I didn't know anything. And I'm like 'F—, these poor guys!' I just really wanted to make a film but do it with them, you know, so it's their voices that are informing you of everything that's going on." 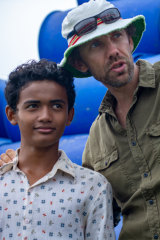 Rathjen's film Buoyancy, which is screening at this year's Melbourne International Film Festival, is part thriller, part docudrama and part contemplative arthouse. It is set on a fishing trawler, where many of the crew are slaves.

Typically, workers are brought to Thailand from poorer neighbouring countries by people traffickers in the belief they are going to factory jobs with proper pay. Instead, they find themselves on boats, working 18-hour days for years on end for nothing. If they sicken, they go overboard. If they rebel, they go overboard.

"And then there were the little things," adds Rathjen. "The guys I interviewed said they would fight over water or a cup of rice. Because it was so hard that they were going crazy."

Rathjen's hero Chakra (Sarm Heng) is the son of a Cambodian rice farmer. He is only 14. Like adolescents anywhere, he has a strong sense every time he sees a truck on the distant highway that life is passing him by. Lured by village talk of the wages to be earned in Thailand, he leaves home quietly at dawn and joins a bus heading to the border. A trafficker pushes him into the back of a van with another Khmer; next, he is on the back of a motorbike, clearly thrilled to feel the wind in his hair as he heads for new horizons. He's just a kid. He could not conceive of the hell that lies ahead.

Rathjen certainly brings an adventurous spirit to his filmmaking. His short film Tau Seru, which was selected for Critics' Week at the Cannes Film Festival in 2014 and won the award for the best Australian short at the Melbourne Film Festival, was set in a remote corner of the Himalayas. Making a film with a mixed cast of actors from Cambodia, Myanmar and Thailand – all non-professionals, many with no language in common and only one of whom spoke any English – seems difficult enough. Making it about an illegal trade where troublemakers don't live to tell any tales adds a degree of difficulty way off the scale.

"I didn't really think about it," Rathjen says. "I was probably pretty naive. Certainly, the Thai side of it is virtually impossible to penetrate: I travelled there a few times and I couldn't get anywhere near it."

By a trick of timing, however, his researches came in the wake of an investigation by the Associated Press that led to the release and repatriation of about 500 former fishermen who had been imprisoned by the trawler operators on the remote Indonesian island of Benjina. That was in 2015.

"Hundreds of slaves had been kept there, held against their will, who had been working on the trawlers,” says Rathjen. “They were using it as a docking point, but there was absolutely no way for them to contact anyone or escape from there. A lot of those survivors were being repatriated through NGOs in Thailand and Cambodia and I was able to interview a lot of them."

The details of Chakra's ordeal come from them. When that story broke, the European Union threatened trade sanctions if the Thai military government did not institute reforms while the United States put it on a "watch list". The government has increased boat inspections and expedited compensation claims through the courts, but change is slow and difficult to enforce on boats that are often out at sea for months at a stretch.

A final addendum to the film tells us that there are an estimated 200,000 men and boys enslaved in the Thai fishing industry, which is worth about $US6 billion ($8.85 billion) annually and trades all over the world. 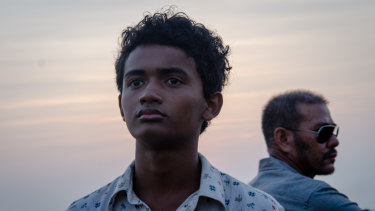 Sarm Heng plays a young boy who thinks he is escaping to freedom in Buoyancy.Credit:MIFF

All this was surely ripe material for a documentary, but that wasn't what Rathjen wanted to do. There are documentaries on the subject already – there was even one in the Berlin Film Festival, where his own film had its world premiere – but he wanted to convey the lived experience behind the horrifying facts and figures.

"I felt I really wanted to take the audience on a journey where they would understand that desperation to leave home and then kind of put them on the trawler."

And it isn't all horror. There is beauty here, especially in Michael Latham's caressing shots of the sea; Rathjen also devotes time to working up a visceral sense of the slush of fish on the deck, the close heat of the cabin where the workers sleep on bare boards, the thump of the engine that merges into the music devised by composer Lawrence English and sound designer Sam Petty.

"Hopefully that all contributes to the believability," Rathjen says. "I hate music in films that kind of imposes emotion on the audience, I just wanted to have the film breathe with the music."

That believability also came from a pursuit of documentary truth within the fiction. For example, Rathjen pushed his Thai casting director to find former fishermen to work the boat. "I said we needed that because even though they would be mainly in the background, they would inform so much of the film just by knowing what to do." A couple had been slaves; others seemed to have been getting paid, but they knew the flavour of that life.

"Sarm and Mony [Ros, a professional actor who plays another Cambodian tricked into the industry] could lean on them for information and we could talk about what life is like out there emotionally and physically and the psychological challenges. They made up for their lack of acting experience in spades with the other things they contributed." 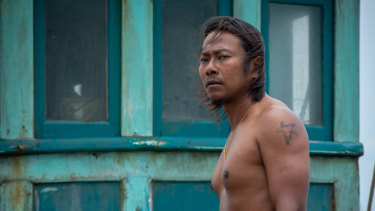 Thanawut Kasro, a Thai actor and director who plays the swaggeringly alpha captain, worked on a boat himself between the ages of 11 and 13.

"I don't know how you measure that experience," Rathjen says, "but we certainly talked about it."

Thanawut wasn't a slave, but he didn't understand much of what was happening to him either.
"It's the not knowing," Rathjen says. "Never knowing what's going to happen, you know. At that age you are so impressionable and a lot of the guys were so afraid to ask or complain. Just not knowing if they'll ever get off, if they will ever see their family again. They don't even know where they are: they could be anywhere, out in the water."

What struck him most powerfully was their collective commitment to making the film.

"It was harder than normal work," Sarm told a rapt audience in Berlin. "You need to stay under the sun, you need to pull the fish into the boat which is disgusting and the sun was burning our legs – we stayed only maybe one hour on the boat but for anyone who worked on the trawler, it's really hard."

Even so, says Rathjen, nobody complained. They knew it was important.

"Maybe if a film like this had been made 30 years ago it might have helped, because this situation has existed for decades," he says. "So that was my goal. To bring awareness and hopefully change something."