So long, farewell. Bridgerton fans received disheartening news on Friday, when it was announced that Regé-Jean Page would not be part of the hit show’s second season.

The 31-year-old British actor quickly became the breakout star of the Netflix series by captivating and seducing fans as the Duke of Hastings throughout season one. The first season centered around Page’s character, and his love story with Phoebe Dynevor’s Daphne Bridgerton. While fans expected to see the continuation of their life as newlyweds and parents in season two, alas they will not.

After Page expressed that it was a “pleasure and a privilege” to be a member of the show, fans, including Kim Kardashian, took to social media to react to his shocking departure.

“Wait!!! WHAT????” Kardashian exclaimed on Bridgerton’s Instagram post. She previously posted about being “not OK” after watching Page and Dynevor’s steamy scenes and love story unfold. 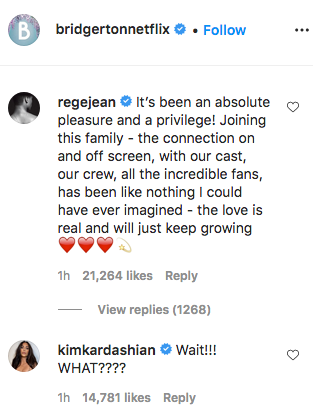 The show’s creator, Shonda Rhimes, wrote on Twitter, “Remember: the Duke is never gone. He’s just waiting to be binge watched all over again. #ShondalandMenOnNetflixAreForever.”

Remember: the Duke is never gone. He’s just waiting to be binge watched all over again. #ShondalandMenOnNetflixAreForeverpic.twitter.com/e4fAhuKSku

Others, however, weren’t so forgiving, with YouTuber Kalen Allen tweeting, “There better be a real good reason for Regé-Jean not coming back to Bridgerton! This news really ruined my morning!”

There better be a real good reason for Regé-Jean not coming back to Bridgerton! This news really ruined my morning!

Others simply expressed their sadness and heartbreak with memes, GIFs and more.

Not Bridgerton team sneakily giving us Edwina to less the shock of Rege leaving #goodbyerege#bridgertonpic.twitter.com/NBT4w9TB9y

Wait, Rege Jean-Page isn’t gonna be in the next Bridgerton??? pic.twitter.com/ik87rVMRID

now i shall go cry.. but thank you for being an amazing duke of hastings. good luck on your future endeavors.. ❤️ pic.twitter.com/9DunxtGajq

Accurate footage of me finding out that Regè-Jean Page won’t be in Bridgerton series 2 😭😭 pic.twitter.com/dG8aS8Ns2H

Season 2 of Bridgerton will turn the focus to Daphne’s older brother, Lord Anthony Bridgerton (Jonathan Bailey), as did The Viscount Who Loved Me, the second book in Julia Quinn’s series on which the show is based. Bailey previously told ET that Bridgerton‘s second season would be “convoluted and sexier.” Simone Ashley also stars as the female lead as Kate Sharma and Anthony’s main love interest.

Earlier this week, it was also announced that newcomer Charithra Chandran joins season 2 as Kate’s sister, Edwina. In the books, Edwina is the one who initially catches the viscount’s heart. It is noted that Page’s Duke of Hastings rarely makes an appearance in the second book, as each one is based on a new couple.

Many other fans also made the note about the storyline change via Twitter:

So sad that Regé-Jean Page will not be in season 2 of Bridgerton but they are going by the books and it wasn’t meant to only follow Simon and daphne. Absolutely loved him as Simon, but I’m so ready for Anthony! Book 2 is my favorite 🤩 #Bridgerton

Not some of y’all wanting to stop watching Bridgerton just because Regé-Jean Page isn’t gonna be in it 🙃 Like??? The book series that the show is based on is about EVERY Bridgerton kids own love story. pic.twitter.com/3atydfkRhI

I'm so sad even though I'm not surprised. Simon's not really in the books anymore. Still wish you could have stuck around for the pall mall game scene in the book but I understand. Fly high Regé! You will be missed 😢

.#Bridgerton Was hoping for some scenes of the Duke and Duchess together, even though they were not prominently in book 2, thank you for bringing Simon Basset, Duke of Hastings to life and looking forward to your future projects(PS you can still change your mind, just saying🙏🏾❤️) pic.twitter.com/eOnZb7Ng6V

So I'm not worried about #Bridgerton season 2. I was a little sad the Duke won't be continuing but purely from the book point of view as I love how the families intermingle after they've married.

The TV show is another thing. I can't wait for #kathony to come! pic.twitter.com/BiKWk6ahQH

…..he isn't the main character in the rest of the books, he would have been in about 2 scenes. I'm not sure what y'all were expecting?

See more on Page and Bridgerton below.