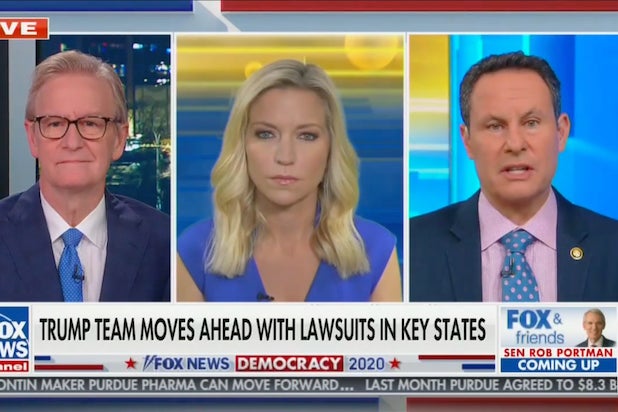 “Fox & Friends” co-host Brian Kilmeade said on Wednesday that “it’s in the country’s best interest” if President Donald Trump starts working with the Biden transition team and gives them access to briefings.

“Here’s the thing: For the president of the United States, while he continues to fight on, and this is probably going to be the end of the week for Pennsylvania if they don’t produce something, I think it’s in the country’s best interest if he starts coordinating on the virus, starts coordinating with security with the Biden team and just brief them,” Kilmeade — one of Trump’s vocal on-air supporters — said.

The “Fox & Friends” co-host also said that coordinating on the COVID-19 response was necessary so that the country doesn’t “drop the ball.”

“On the virus, we need, we’re going to be able to get this out as soon as two weeks. We need to coordinate on the transportation and implementation, and you’ll see how thorough the planning has been so we don’t drop the ball in a little while,” Kilmeade said.

The Biden-Harris transition team has continued to be blocked by the Trump administration from receiving high-level intelligence and COVID-19 briefings typically given to presidents-elect, leading Biden to seek briefings from experts outside the government.

Trump has refused to concede, baselessly claiming in a tweetstorm Wednesday morning that there is widespread voting fraud and calling the election rigged.