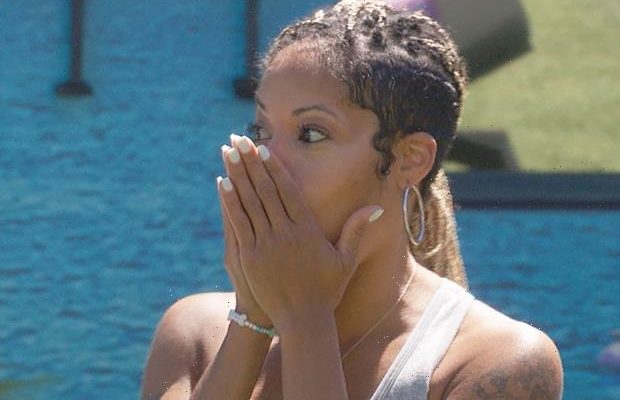 Big Brother‘s double eviction on Thursday had the potential to be historic in more ways than one.

Not only did the hour serve as one of two back-to-back double eviction episodes — the first time there’s ever been two consecutive double eviction weeks on the show — but it also gave the dominant Cookout alliance a chance to realize its goal of reaching the Final Six as a unit, guaranteeing Big Brother will have its first-ever Black winner this season.

So, did The Cookout succeed? I’ll give you that answer up front: Heck! Yes! They! Did! By the end of the hour, Hannah, Azah, Tiffany, Kyland, Derek F. and Xavier were the only houseguests left standing, after weeks and weeks of covert gameplay (and serious temptation to betray one another, though they never did).

But let’s break down the details of how, exactly, Double Eviction Night No. 1 unfolded:

* We’re privy to a condensed version of the past few days’ strategizing, with Alyssa thinking it will be a major blindside for Tiffany if Claire ultimately leaves instead of Xavier. (Ha!) She also realizes aloud to Hannah, Azah and Derek that if Claire gets evicted, the Final Seven will all be contestants of color, leaving the Cookout members to do their best, “Oh, wow! You’re right! Hadn’t realized that!” To Alyssa’s credit, she also remarks that if she’s evicted after Claire, it will at least comfort her to know a Black houseguest will win the prize money. Glad you feel that way, girl!

* Despite Claire’s last-ditch effort to get Xavier ousted, by way of a pre-vote speech that highlights just how formidable a player Xavier really is (she’s right and she should say it!), Claire is evicted by a 4-1 vote. The lone vote to keep Claire is a sympathy vote from Hannah, who plans to pin her rogue vote on Kyland in the coming days, if need be.

* In a trivia-based, BB Comics-themed Head of Household competition, Hannah emerges victorious. She nominates Xavier and Alyssa, lying to Alyssa that Xavier is her true target and Alyssa is merely a pawn to take a vote away from him. I’m not sure I follow Hannah’s jury management here: She and Alyssa made a Final Two pact just days ago — which Hannah knows isn’t legit, but Alyssa believes is legit — and Alyssa’s not thrilled to hear one of her “allies” is nominating her.

* Power of Veto time! Competing houseguests — that is, everyone except Kyland — must complete an oversized puzzle in the fastest time, and Xavier completes that assignment in what feels like seconds. He removes himself from the block, Kyland goes up as his replacement… and Alyssa is booted by a vote of 3-1, cementing The Cookout’s victory as they reach the Final Six together.

It’s a somber celebration for the alliance at first, as Xavier is heartbroken to see Alyssa go, and Kyland seems genuinely bummed and confused that Hannah put him on the block at all. But when we check back in with the Final Six after Alyssa’s post-eviction Q&A, they’re much more exuberant, hugging and high-fiving as they bask in this momentous milestone.

“The best alliance to ever do it!” Tiffany says — and in a perfect final moment before the broadcast ends, the season-long allies put their hands in the center of a circle, yelling, “One, two, three, Cookout!” Roll credits. It’s wonderful.

With that, I hand it over to you. How do you feel about Thursday’s double eviction? And which two houseguests do you hope to see ousted next week? Drop a comment below!