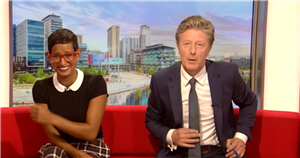 BBC Breakfast host Naga Munchetty was left in stitches after the TV presenter confessed Charlie Stayt “would make a great corpse” after her co-host begged for an acting role on air.

During Friday’s visit to the BBC sofa, the dynamic duo welcomed award-winning actor Ben Miller onto the sofa to discuss his latest children’s book which he wrote during lockdown.

As the author explained his new novel on the show, the 60-year-old broadcaster couldn't help but bring up his previous role on the BBC comedy drama Death in Paradise which he starred in back in 2011.

Charlie recalled how the BAFTA winner previously promised him a small role on the Caribbean murder mystery show, and it’s fair to say the newsreader was disappointed at missing out on the part. The broadcaster explained: “There was a previous chat we had on this sofa in which you suggested that because of your influence you could get me a small role on Death in Paradise which I quite fancied.

“You did say that you had some kid of influence, I know that you’re not on it any more.”

Ben chuckled at the comment as he joked that his role as the deceased clown didn’t come through, much to his disappointment.

The actor quipped: “I'm surprised that you think that I have any power, but the script didn’t come through – the one where you’re the children’s party clown killed early doors.”

It was at this point that his co-host Naga chimed in with: “I think he’d make a good corpse, wouldn’t he?” as Ben agreed: “You'd make an amazing [dead clown]. The clown does stay on the floor throughout the whole show.”

Charlie insisted: “You think I'm joking don’t you? I'm serious, I actually do want the gig,” as the actor added: “The clown outfit’s in the post.”

Later on in the show, Naga asked weather reporter Matt Taylor whether Charlie would be a good actor, saying: "Don't you think Charlie would make a really great corpse?"

Baffled at the question, the meteorologist confessed: "I don’t know how to answer that one," before he joined in on the joke.

He added: "I think he'd be a very good actor in it, clown feet, big nose, the whole lot."