“I had the idea of a sitcom wife leaving her brightly-lit, laugh track living room with her funny husband and walking through a swinging door to the kitchen,” “Kevin Can F Himself” creator Valerie Armstrong told IndieWire. As the character crosses into the kitchen the audience sees that her once flawless makeup is now caked, her kitchen covered in water stains. Elements that, in a sitcom, are taboo.

For Armstrong, much of the inspiration for the AMC series starring Annie Murphy came in the midst of a rage felt by women for decades. “I was listening to this podcast; it was June of 2017,” she said. “Two women comedians [were] talking about pilot season and how every year they go out for sitcoms and every year they’re told, ‘We need a really funny woman.’ Then they get the sides and it’s all lines like ‘What do you mean?’”

Intrigued by the premise of a sitcom told from the tired wife’s perspective, Armstrong created “Kevin Can F Himself,” following sitcom wife Allison (Murphy) and her desire to change her life despite the machinations of her doofy husband, Kevin (Eric Petersen).

The cast, once assembled, went through the process of watching how sitcoms are presented and Armstrong knew it would be too easy to poke fun at the most obvious trope of the genre: why a beautiful woman like Murphy’s Allison would stick with a guy like Kevin. “It was exciting to say, ‘Her with him?’ I wanted to say, ‘Yes, her with him!’ What is it, not just about Kevin; what is it about her psychology, or her past, or her issues that makes her stay?” said Armstrong.

It was a delicate balance for Petersen himself to find playing Kevin. He said it would have been simple to play the character like a man who hates his wife. “What I was aiming for was to make him lovable… it’s really pointed about his lack of compassion for his partner that it would be more realistic to true life.” Armstrong saw that as well and said much of what she found interesting about the character was Kevin’s sense of humor. “If someone is funny and can make me laugh I automatically think they’re about 10 times hotter than they are,” she said. “It always made sense to me that he made her laugh.”

Humor aside, Armstrong always perceived Allison’s character as a co-dependent woman with a heavy desire to do things in a right way. “Divorce is not the right way,” Armstrong said. “For 10 years she’s convinced herself that she is happy. That everything in her that tells her she’s not isn’t a signal, it’s a flaw.” Even the way Allison interacts with other women is indicative of how the sitcom landscape often views women: as characters who aren’t necessarily friends but just inhabit the same space. 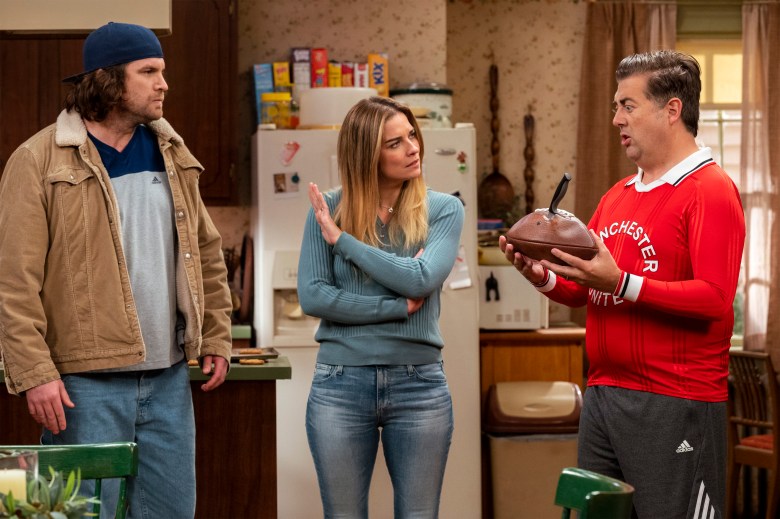 Allison is forced to team up with her neighbor Patty (Mary Hollis Inboden) and for Inboden and Murphy, they both noticed how sitcoms keep women distanced from each other. “We spent the first three days [filming] multicam [with] Annie and I 10 feet apart,” Inboden said. “On the fourth day when we got out into the sunlight I took the biggest deep breath. It was so nice to be out of Kevin’s universe.” Once Allison and Patty come together, they realize their inability to talk to each other.

“These two women have been sitting 10 feet apart from each other for 10 years,” Murphy said. “Allison knows Patty is not her kind of girl and Patty knows that Allison is not her kind of girl and they’ve just left it at that.” Through the two picking away at their relationship and the bonds they end up creating, according to Murphy, the pair become each other’s saviors.

For the entire cast, as well as Armstrong and executive producer Craig DiGregorio, working on the show has caused them to look at sitcoms differently. “There is truly no going back,” Murphy said. “I intentionally put on a sitcom that I know is gonna boil my blood and I sit there and shake my fist at all the insane amounts of misogyny, in particular, but there are also shades of homophobia and racism.”

“You get lulled into thinking this stuff is normal,” said DiGregorio, who said he noticed the problems with sitcoms well before working on this show specifically. He said the goal of “Kevin Can” is to certainly entertain, and that sitcoms themselves can be entertaining, but that audiences need to think more closely about what they’re consuming. Armstrong brings up an episode of “King of Queens” where Kevin James’ character pays a dogwalker to walk his wife’s dad. “You can still laugh at it but I’m looking at it differently,” Armstrong said.

There’s also a desire to watch the series in the context of giving women agency. For Armstrong, whose production company is named Thank You Sorry Thank You Productions, that problem of not celebrating your accomplishments still plagues her. “I got lunches for a long time and to try to find that balance of gratitude, which I do always want to remember, also like, ‘No, I belong here because this is my show,” she said.

Watch an exclusive clip from the series below:

“Kevin Can F Himself” airs on AMC.