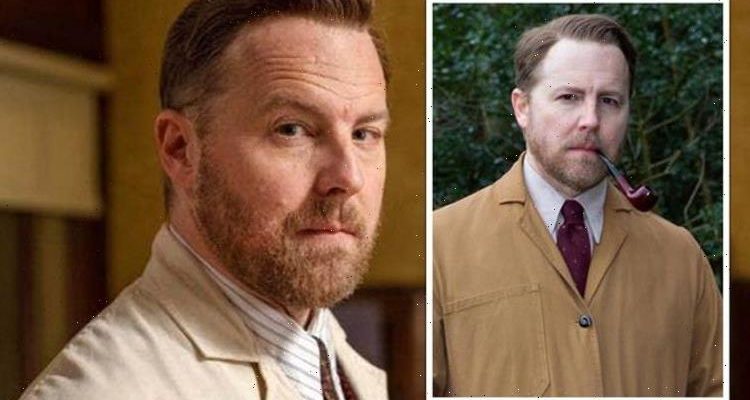 All Creatures Great and Small returned to Channel 5 for a second season in 2021 and the Christmas special is on the way. The uplifting family drama was inspired by Yorkshire vet Alf Wight’s book, which was written under the pen name, James Herriot. Siegfried Farnon was based on the real vet Donald Sinclair, but what happened to his wife?

All Creatures Great and Small returned to Channel 5 to continue the story of James Herriot’s (played by Nicholas Ralph) working life in the Yorkshire Dales.

Romance was in the air in the second season as James proposed to his love interest, Helen Alderson (Rachel Shenton).

His boss Siegfried Farnon (Samuel West) was the one who prompted him to make the next move.

Siegfried himself also moved forward in his relationship with Diana Brompton (Dorothy Atkinson).

The character is based on Donald Sinclair, Alf Wight’s real-life boss at Skeldale House.

The British veterinary surgeon bought the practice in 1939 and he hired Alf to run it whilst he served in the Royal Air Force.

The vet ended up taking his own life in June 1995 at his home near Thirsk, two weeks after the death of his wife Audrey.

He had been married to Audrey for 53 years and they had a daughter, Jan, and a son, Alan.

Sfgate.com shared an obituary written at the time of Donald’s death and it quoted one of his close friends.

William Foggitt said of Sinclair: “He missed Alf Wight, and when Audrey died he just faded.

“He was devoted to her, and he was heartbroken when she died.”

Not much is known about the cause of Audrey’s death, but she died not long after Alf Wight.

In the latest adaptation of All Creatures Great and Small, Siegfried does not open up about his previous relationships.

Some viewers believe the character Mrs Hall (Anna Madeley), the housekeeper, is based on Donald’s wife.

She is also called Audrey, although she very rarely uses her first name.

Fans are still rooting for Siegfried and Mrs Hall to form a romantic relationship.

They already have a special bond as friends but have since found potential love interests of their own.

While Siegfried has been preoccupied with Diana Brompton, Mrs Hall found herself getting closer to Gerald Hammond (Will Thorp).

She was reluctant to admit her feelings for him at first but decided to open up to the idea of a romance.

Viewers will be keen to find out who she ultimately ends up with.

The upcoming Christmas special, which will air on Christmas Eve, will once again have relationships at its heart.

James and Helen, now engaged, have the trouble of deciding where they will spend their first Christmas together.

There will be plenty of ups and downs as the festive special sees the beloved Tricki-Woo fall ill.

The adorable Pekingese is rushed to Skeldale in the hope Siegfried, James and Tristan (Callum Woodhouse) can help him recover.

All Creatures Great and Small is available to watch on My5 and Acorn TV.