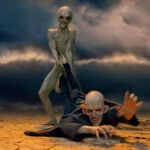 As all good Ryan Murphy knows by now, the 10th season of “American Horror Story,” titled “Double Feature” is split into two parts: the first half is called “Red Tide” and the second is named “Death Valley.”

Here’s the description for “Red Tide,” per FX: A struggling writer, his pregnant wife and their daughter move to an isolated beach town for the winter. Once they’re settled in, the town’s true residents begin to make themselves known.