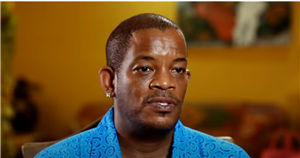 Caesar Mack became an instant star on 90 Day Fiancé because of the outlandish nature of his relationship. When he first appeared on the show, he was dating a woman named Maria, who he sent money but never met. In fact, throughout the entire season, Caesar never managed to meet Maria. Since the show ended, Caesar has moved on and been cashing in on his fame. Now, he claims that he and Drake are friends.

Are Caesar and Drake friends?

Caesar recently appeared on the spinoff, 90 Days Bares all. In Sunday’s episode, he revealed that he and rapper Drake had become “pretty good friends” after Drake saw his story on the show.

“He messaged me, he was like, ‘Hey Ceas, how you doing?’” Caesar said. “We just started becoming friends and he sent me some of his clothing from his clothing line. Yeah, he’s an awesome person.”

90 Day Fiancé star Yara Zaya was skeptical that Caesar was talking to the real Drake, especially given how he was fooled by Maria.

“But if it’s the real Drake, I think this sounds so much cool because I love him, OK?” she said.

What happened between Caesar and Maria on ‘90 Day Fiancé‘?

Almost as soon as Caesar connected with Ukrainian beauty Maria online, he began sending her money. The pair dated for five years, with Caesar sending her $800 a month, totaling $40,000 throughout the relationship. On his season, Caesar planned to meet Maria in Mexico, however, she stood him up. The pair broke up after Maria failed to come to Mexico but got back together shortly thereafter.

“Even though Maria broke my heart since I’ve been home, we’ve been talking again. I’m not going to give up on her,” Caesar said on the show. He also began sending her money again.

“You know, it’s just that I love her so much, so I just decided to keep trying to help her out,” he said. “I really don’t think that she’s using me. She’s just… I think that she just needs a little help. Just hoping everything will work this time.”

By the reunion, the two had broken up.

Later, it was revealed that Caesar actually did meet Maria once. He said that he flew to Ukraine to meet her, despite her not responding to any of his emails or texts. Caesar claimed that Maria actually did meet up with him during that trip, however, he didn’t have any photo proof of the encounter. The two are officially done now.

Caesar is currently single and looking to start dating again.