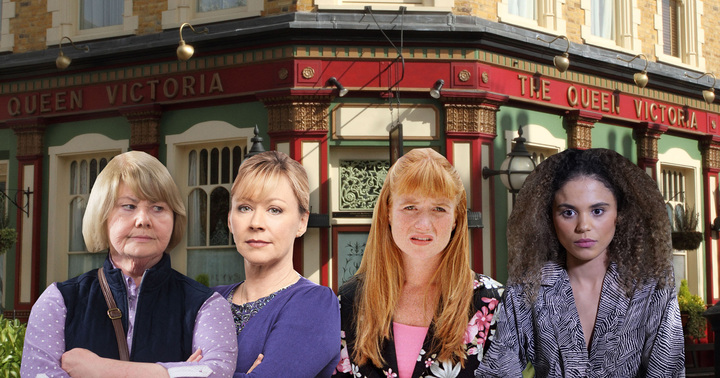 New EastEnders recruit Brian Conley, who’s been brought in to play Sonia’s dad Terry ‘Rocky’ Cant, has welcomed the idea of Lindsey Coulson returning to the soap to reprise the role of her mum Carol.

Speaking about the idea of Carol resurfacing at some point in the future, Conley told Radio Times: ‘That’d be lovely. Let’s see how it pans out, eh? I could go and see Carol or she could come and see me. Lindsey is an incredible actress and everyone talks about how lovely she is. So, yes, that’d be fun.’

Carol Jackson was last seen on screen in 2015 roaring off on a motorbike and celebrating her newfound freedom, but fans would surely love to see her park back up on the Square to explore the family dynamics between herself, Sonia and Rocky. And it’s an idea that has got me thinking: which other EastEnders characters should be making a comeback?

Read on for my wish list of Walford returnees and the purely hypothetical plotlines in which they could be involved:

For a man who’d been the catalyst for so many cliffhangers over the years, roguish Max (Jake Wood) had an unusually low-key exit back in February. But what if his departure is a fake out and that the plan is actually to re-introduce the character back into the community?

With Linda (Kellie Bright) now pregnant with what she presumes to be his baby, Max could get wind of this and resurface on the Square. And being no stranger to a spot of Machiavellian scheming, he could make nice with the Carters, only to then snatch the newborn once it’s born and then vanish.

With Kellie Bright expecting a baby in real life, we could see Linda leave temporarily to track Max down, while Mick (Danny Dyer), who’s feeling conflicted about this latest addition to the clan, holds the fort at the Queen Vic.

Wicked Aunt Babe (Annette Badland) was last seen in February 2017 cursing the Carters while standing in the pouring rain after being turfed out of the Queen Vic.

Now, there is an argument to say that Babe’s wish has, in the intervening years, come true. Mick and Linda have lost (and then regained) the pub and their marriage has, at times, come close to collapsing. And what if the old plotter was to resurface now, just as pregnant Linda is awaiting the arrival of this baby she fears is Max’s?

We’d witness Babe claiming to be broke and homeless, with kind-hearted Mick giving her shelter. But, pretty soon, she could be seen serving up poisonous comments along with her famous trifle. And her less-than-legit money-making schemes could even fill the void left in the Square by Big Mo (Laila Morse) after she calls it a day.

Now, hear me out on this one. I’m not expecting some kind of miraculous resurrection for Chantelle here. But as Gray (Toby-Alexander Smith) becomes increasingly unhinged as his body count rises, it’d make for spine-tingling telly if he was to start seeing visions of his late wife wherever he turned.

Each time he entered his kitchen, there she could be, standing by the dishwasher. Or while talking to Mitch, Gray could glimpse Chantelle (Jessica Plummer) standing behind him, a silent reminder of his guilt.

If EastEnders really wanted to push the envelope, they could even stage one of their famous two-handers as Gray pleads for forgiveness from the woman whose life he took.

The incurable gossip baffled fans back in January 2020 when she hastily relocated to Ireland and left Sonia (Natalie Cassidy) a cursory voicemail message about her plans. It was a send-off that did a disservice to someone as iconic as Dot, but June Brown was adamant she’d permanently parted ways with EastEnders, commenting that she’d ‘never go back’.

But a Dot comeback remains desirable, if only to give her a fitting final scene. But there would also be plenty of plotline mileage in her mothering of Stuart Highway (Ricky Champ), which would have a new dimension to it now that his nan Vi (Gwen Taylor) has made herself at home. I’d expect there to be a certain frostiness between the two women, each trying to outdo the other when it comes to Stuart’s welfare.

With Adam Woodyatt having recently predicted that, due to his theatre commitments, he wont be back on EastEnders before 2022, it seems we’ve a long wait before Ian finds his way back to Walford.

Last glimpsed shuffling off to the Tube station after coming close to ending his own life, Ian could eventually return a changed man. Having once been an entrepreneur obsessed with money, it’d be interesting if Ian’s outlook on life had altered drastically in his months away. No longer valuing possessions or material wealth, he decides to sell 45 Albert Square and become a philanthropist.

The only trouble being that Kathy, Bobby, Peter and Mila will be made homeless in the process. Ian’s solution? Come and live with him in a static caravan! But will they be as enthused as Ian clearly is about living a simpler life?

Believing Whitney to be too much of a liability but not yet wanting to kill her, Gray manages to convince her to get away from the Square before Phil uncovers her part in the hit and run that put Kat in hospital. Wanting Whit completely under his control, Gray could set her up in a bedsit under a false name, claiming it’s for her own safety, while making out to the rest of the Square that she’s simply left town.

But after Bianca gets hears about Whit’s disappearance, she arrives back in the neighbourhood to seek answers and leaves Gray rattled when she starts quizzing him. Meanwhile, an isolated Whitney starts piecing things together and realises that her life may be in danger if she gets on the wrong side of Gray, who is visiting regularly to drop off supplies.

When Bianca eventually decides to follow Gray to the location where he’s got Whitney hidden away, the stage is set for a dramatic (and potentially fatal) showdown.