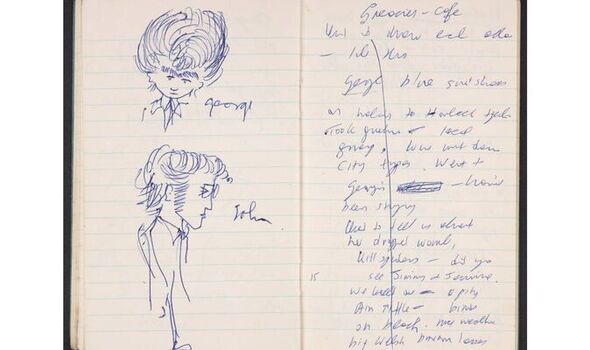 He had unprecedented access to John Lennon, Sir Paul McCartney, George Harrison and Sir Ringo Starr for his 1968 book, the only authorised biography of The Beatles.

It includes previously unseen sketches of Harrison and Lennon by Sir Paul, Davies’s drafts of The Beatles: The Authorised Biography with handwritten comments by Lennon’s Aunt Mimi, and Super 8 video footage of his family on holiday in Portugal with Sir Paul and Linda McCartney.

Also included in the acquisition are the typed notes of Brian Epstein, the Beatles’ manager from 1962, on how the band should present themselves, including what they should wear in public.

Davies said: “The further we get from The Beatles, the bigger they become.”

“I never thought all these years later my scruffy notebooks would be of such interest.”

“I’m pleased that they’ll be made available to a wider audience of Beatles fans and researchers through the British Library.”

“The items will go on display alongside others relating to The Beatles at the Sir John Ritblat Gallery at the British Library in London.”

To mark the acquisition, Davies will recall the writing of the biography and offer insights into his archive at the Library and online on November 11.