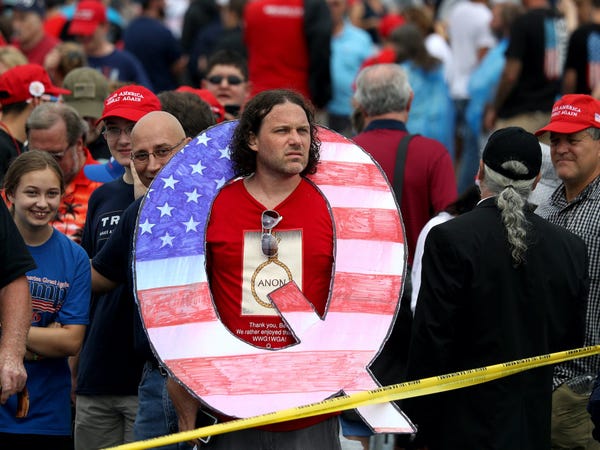 OAN posts certain segments from its offerings on YouTube. But subscribers of the channel's YouTube Live pay $4.99 for 24/7 live viewing and "custom emojis," including at least two QAnon-related symbols, that they can use in the live feed's comments section.

The emoji offerings, which were first reported by The Daily Beast on Wednesday, feature one that says 2020 written as "2Q2Q" and another that says "Q" with an American flag design. The latter has become the main logo of the conspiracy theory movement.

OAN's news segments are extremely supportive of Trump and the GOP. As The Atlantic reported in May, OAN "is Donald Trump's favorite cable-news channel" because it "seems to agree with Trump about everything, in the same way a dog agrees to chase its own tail."

The unfounded QAnon conspiracy theory is based on the idea that President Trump is going to save the country from an evil cabal of elite figures who secretly control the world and are involved in nefarious activities like child sex trafficking.

The QAnon conspiracy theory has become increasingly mainstream this year, as President Trump himself has made flattering comments about the theory's supporters.

At least one OAN host has shown support for QAnon's easily debunked theories. OAN correspondent Kristian Rouz said in a July segment that "a growing number of Americans may be doing their own research, as reports also say QAnon is becoming a widely accepted system of beliefs."

Still, this is the first instance of the channel appearing to clearly align itself with the conspiracy theory movement.

Insider has reached out to a representative for OAN for comment.

Writer of Bryant film: ‘Evil repeats itself if we don’t shine a light on it’
TV & Movies