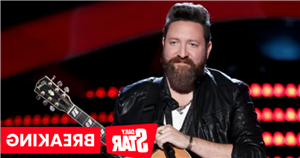 Singer and reality TV star Nolan Neal has passed away aged 41 following a battle with addiction.

The musician was famed for starring on both America's Got Talent and The Voice in the US.

Neal died on Monday (July 18) and was found at his home in Nashville by his cousin Dylan Seals, according to TMZ.

Both Dylan and a medical examiner confirmed his death to the publication, but an official cause of death is not yet known.

Nolan himself has opened up about his battles with substance abuse in the past.

Nolan shot to fame on the 15th series of America's Got Talent in 2020, where he reached the quarterfinals of the talent competition and sung a touching original track titled Send Me A Butterfly.

In his first audition for the show, he admitted he lost a record deal because of his substance issues.

He said at the time: "I got a record deal in Los Angeles, I was like, ‘This is it!’ And I partied really hard.

"Pretty soon I started to become unmanageable because I thought I was a rock star. I got to NY to record my record, and I just remember, I couldn’t sing because I was so messed up. The label decided to drop me."

The singer explained: "I got back to Nashville, and I started downward spiraling. It got so bad, people had to step in."

But he revealed he had become sober and felt "very clear and focused" during the series.

He won a standing ovation from judges Simon Cowell, Heidi Klum, Howie Mandell and Sofia Vergara.when he performed an original track called Lost, which he wrote after getting clean.

Nolan's cousin Dylan said the singer was sober during the time they lived together for four months before the pandemic.

Dylan said Neal was in good spirits and had been focusing on his music career, with the pair often jamming together.

The singer was also a contestant on The Voice in 2016, where he was poached by Maroon 5 singer and judge Adam Levine before he was eliminated in the knockout round.