The all-girl pop group, the Pussycat Dolls, which originally formed as a burlesque group by founder Robin Antin in the ’90s, really hit the scene in 2005 with their debut studio album, “PCD.” The No. 5 charting album featured popular singles like “Stickwitu,” “Don’t Cha,” and “Buttons.” After their second album, “Doll Domination,” was released in 2008, the group fizzled with the rest of the pop world’s girl groups of the early 2000s. However, fans were enthused to hear that the group was getting back together more than 10 years later.

“In the past few years, all of us girls have been talking and really trying to figure out when was a good time in everyone’s lives and it just all worked out that this was the right time individually for us to come together,” bandmate Nicole Scherzinger revealed to Entertainment Weekly in February 2020. She announced that there would be a reunion tour and a new single, called “React.”

Scherzinger then spoke about how in sync she and her bandmates still are. “As soon as somebody started playing ‘Buttons’ … we immediately all broke out into the dance-break choreography in unison,” she shared. “This is why we’re the Pussycat Dolls and there’ll never be any other group like us.” As it turns out, there may actually never be the Pussycat Dolls either, as the band is suing Scherzinger, proving that COVID-19 isn’t the only thing stopping the girls’ tour. Keep scrolling to find out more information.

Nicole Scherzinger refuses to participate in the reunion tour 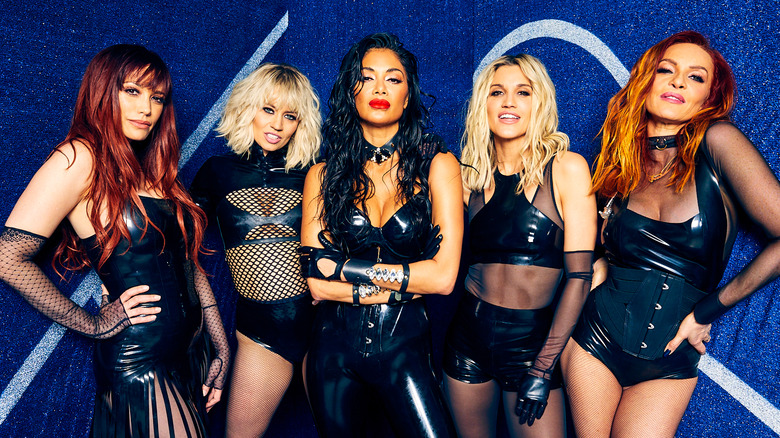 According to The Hollywood Reporter, founder of the Pussycat Dolls Robin Antin filed a complaint against lead singer Nicole Scherzinger in Los Angeles and claimed the singer refuses to do the Pussycat Dolls’ reunion tour, “Unfinished Business,” which she allegedly previously agreed to.

The outlet reports Antin made a deal with the women of the Pussycat Dolls back in 2019 to reunite for a reunion tour that was supposed to begin in the U.K. In that deal, lead singer Scherzinger was supposed to get 49% of creative control of the band’s new ventures. Since COVID-19 killed the “When I Grow Up” singers’ tour plans, Antin claims Scherzinger now “refuses to participate in the tour” unless given 75% ownership and creative authority. What’s at stake? About $600,000 now owed to Live Nation for unscheduled tour dates.

Back when “The Masked Singer” judge was on board, she claimed to Entertainment Weekly that she takes “on a very strong part in the creative role” in the group and is “very opinionated.” The artist added, “as the girls know, I come with a lot of ideas and then we all work together to see what’s best for business.” To be fair, former member Melody Thornton was the first to refuse to join the Pussycat Dolls on tour, making fans say “I Hate this Part.”