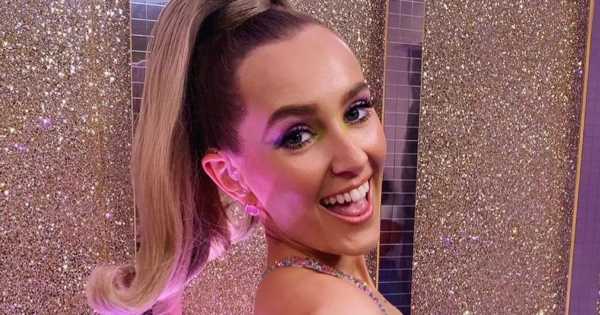 On Saturday, the EastEnders actress made history as she became the first deaf contestant to lift the Strictly Glitterball trophy.

The 27-year-old was partnered with Giovanni Pernice and captured the hearts of fans.

Rose is now on course for huge success after her Strictly stint.

However, before the actress took to the ballroom she made cameos in music videos, including one for boyband The Vamps in 2017.

Rose starred as a character's girlfriend in the British band's single Middle of the Night as some of the lyrics were communicated through sign language.

The video is directed by Mike Baldwin and sees Rose as one half of a couple who are struggling to communicate with one another.

The music video was released during Deaf Awareness Week.

The pop video was praised for raising awareness of the deaf community and sign language.

During her recent BBC dancing stint, Rose and partner Giovanni incorporated sign language into some of their performances.

Their Couple's Choice routine in week eight wowed viewers and the judges.

During their dance to Clean Bandit's Symphony, the music stopped and the duo continued to dance during the silence.

Judge Anton Du Beke originally called the performance the "greatest dance of all time" on Strictly.

Rose and Giovanni took to the Strictly dance floor once again in the final to perform this dance before being crowned the 2021 champions.

After becoming this year's winners, the National Deaf Children’s Society hailed Rose as a "shining example".

Chief Executive Susan Daniels OBE said: "It’s hard to overstate just what an impact Rose has made, not only on deaf children and young people, but also on the public’s understanding of deafness.

"Throughout her Strictly journey, she’s been a shining example to deaf and hearing people alike. This could be a new dawn for deaf children and young people everywhere because it’s clear for all to see that with the right support and the will to succeed, they can aim for the stars."

She added: "Strictly may have come to an end, but we sincerely hope that this surge of interest in deafness and the desire to engage with deaf people continues long into the future."