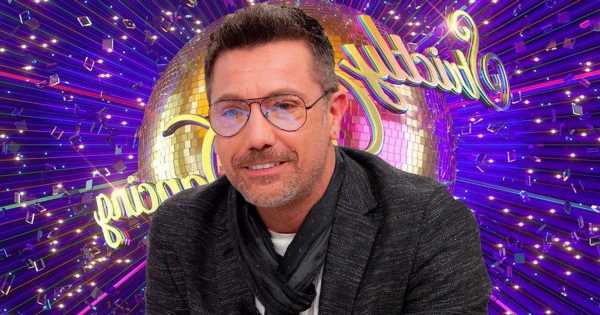 Strictly Come Dancing bosses have hinted they are keen to sign up cheeky chef Gino D’Acampo for the 20th anniversary of the BBC One dance competition.

It is understood TV bosses have started putting out feelers for the upcoming series with producers keen to bring in a killer line-up for the celebratory series.

Now, an insider has revealed the Italian stallion could be the first in the slew of stars set to take to the stage alongside the beloved professional dancers.

Speaking to The Sun, the source has revealed BBC bosses are hunting down the 45-year-old in an effort to convince him to take part on the show.

The TV insider explained: “Every year the team behind the show want to get the perfect balance of stars, whether it’s for their sex appeal, humour, or if they are a particular draw for older or younger viewers.

“But they view Gino as someone who has universal appeal, who is up for a laugh and more than capable of keeping audiences entertained.

“He also has serious star appeal, having been on This Morning for 13 years and winning I’m A Celebrity.”

The dad-of-three – who won I'm A Celebrity… Get Me Out Of Here! back in 2009 – has been offered a slot on the show in the past, but at the time the culinary genius explained that he was too busy to take part.

In 2009, shortly after he was crowned King of the Jungle in the ITV reality show, he was invited onto Strictly but decided to give the show a miss due to his busy schedule.

He said at the time: “That show would require a lot of time and training. Who has got time for that? Not me … not at the moment.”

Daily Star has reached out to the BBC for a comment.

It comes after the TV favourite made his last appearance on This Morning back in March before he temporarily returned to his native country, Italy.

Gino reassured shocked hosts Holly Willoughby and Phillip Schofield that his absence from the show was not permanent and that he would return in “probably autumn or winter.”

He told the duo: ”I was just walking around because I am a little bit sad today because I am going to go to Italy very soon, so this is my last This Morning, until probably autumn or winter.”

For more of the latest showbiz and TV news from the Daily Star, make sure you sign up to one of our newsletters here .