A year on from the release of their pummelling third album Purge, High Tension will play a handful of shows on the east coast that will be your last chance in 2019 to catch the ferocious Melbourne quartet live on stage. Don't say we didn't warn you.

The announcement of these shows coincide with the release this week of a new clip for the track Veil, which vocalist Karina Utomo has described as "a gaze into the systems of fear through the myth of a parallel universe" and being symbolic of "the separation between the human world and the metaphysical, the inner and outer self." Purge, featuring two of 2018's toughest singles in Bite the Leash and Ghost to Ghost, followed debut long player Death Beat (2012) and 2015's Bully. The new album came with a major line-up change and signalled a shift to the more extreme end of metal. 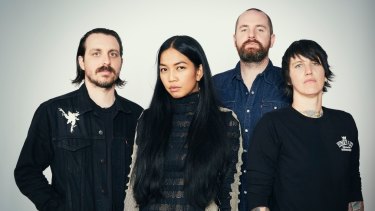 Purge has the extra heavy, brutal attention that drummer Lauren Hammel (Tropical F— Storm) brought, while guitarist Mike Deslandes – who like Hammel joined the band following the release of Bully – took care of production duties on the album. "It was inevitable that we were going to produce a record unlike our previous work," Utomo said. "With Lauren and Mike joining the band, our natural response was to reshape our sound."

High Tension will be part of Brewtality Festival (a celebration of metal, rock and beer) taking place at The Tote and Bendigo Hotel in Melbourne on August 3 and the Lansdowne in Sydney on August 10 with support from Lo! and Arafura. In between those two huge shows they play the Crowbar in Brisbane on August 8. For ticket information go to hightension.com.au

album of the week
Bombay Bicylce Club
Demos 2004 – 2008
(Mmm… Records/Caroline)
★★
Ten years on since the cheerfully named Bombay Bicycle Club released their equally well named album I Had The Blues But I Shook Them Loose!, the lads from London's Couch End ain't so far away from releasing new music. After a few years on the sidelines they've hit the road and will have new tunes for fans sometime soon. In the meantime, they've just released these snippets from their early days, prior to shaking out their first long player in 2009. The seven tracks over 24 minutes here are a grab bag of their fledgling recordings and an early glimpse into their eclectic tastes and style.