Trust a band from Byron Bay to figure out how to get a crowd surfing – they brought their own board.

They also arrived with a lively and punchy brand of surf rock, packing 17 tracks into an hour-long set that barely paused to draw breath. 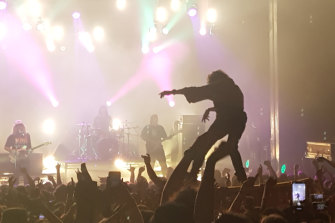 Skegss brought the board and the surf rock, the crowd did the rest at the Enmore Theatre on July 6.Credit:Michael Ruffles

Launching into the sunny Spring Has Sprung, Skegss showed from the outset you don’t need much more than three instruments and three chords to have a good time. Some songs barely have the one idea driving them (see Slayer: “ate a space cake, now my mind is going crazy”) but the loud, sun-drenched punkish rock about the joys and agonies of youth touched a nerve.

Popular single Smogged Out and a couple of album tracks from last year’s debut My Own Mess set the night off on the right note. Bringing out the surfboard shortly after only added to the sense of fun.

If you’re looking for depth, nuance and hidden meanings, you’ve come to the wrong place: and there may have been no better example of what you see is what you get than the explanation of new single Road Trip. "That's the road trip song, hope youse liked it."

An emerging band can be forgiven for having a few songs that sound similar, but the straightforward nature of some material should not be mistaken for any lack of ability.

New York California was the highlight of the night, and the lyrics could have been written on the back of a matchbox: “I’m going down to New York, California/I got my Coca-Cola and I got my cigarettes.” Helping transform it into something of an epic was lead singer Ben Reed’s willingness to hand over his guitar to another Ben, pulled up from the crowd. Happily, he did not disappoint.

Here Comes Your Man, a cover of the Pixies by way of the Velvet Underground we didn’t know we needed, and Heart Attack, with Reed standing alone on stage likening a lover to a vampire, also helped keep the set from becoming too repetitive.

And then, upbeat, loud and raucous through to the end, closing with recent fan favourite Head in the Clouds and 2014’s dreamy debut single LSD. Everyone sent on their way happy, unless they hurt themselves falling off the surfboard.