The name was a bit of a dig. In 1990 an English music journalist noted that a bunch of young bands were hiding behind their fringes on stage and staring down at multiple guitar effects pedals as they tapped them with the soles of their Doc Martens to create blurry blizzards of noise and clouds of harmonics to back their whispered, dreamy vocals – and the term shoegaze was born.

Shoegaze shone brightly but burned out quickly, arriving at the dawn of the '90s and falling out of favour with the fickle English music press after being knocked sideways by the arrival of grunge in 1991, then being usurped by Britpop's sing-along choruses and lippy attitude soon afterwards. 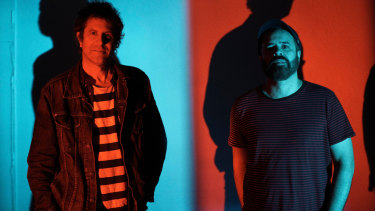 A titan of shoegaze, Swervedriver is leading a resurgence in the 90s British music genre.

Ride and Swervedriver, two titans of the genre, are about to tour Australia. Like fellow original shoegazers My Bloody Valentine and Slowdive, they split up in the '90s, only to reform years later – Swervedriver in 2008, Ride in 2014. And rather than rest on past laurels, they both have new albums this year – Swervedriver's Future Ruins came out in February; Ride's This Is Not A Safe Place is released August 16.

"After we split [in 1996] I think people were pleased to see the back of us because we weren't making amazing music at the end," admits Ride guitarist and co-lead singer Andy Bell. "But with our latest album we went back to that feeling of just the four of us at art school, when we wanted an onslaught of volume, but we wanted melody too."

British music journalist Simon Reynolds has said that shoegaze was in many ways a reaction to the times. Young English musicians felt disillusioned and helpless due to the state of the country and subsequently created squalls of guitar noise, floating melodies and imagery about being asleep and dreaming.

"That viewpoint resonates with me," says Bell. "All our lyrics were about escaping. We wanted to escape our town and in the bigger picture, we wanted to escape years of Tory rule. That does affect you and bleed into your psyche." 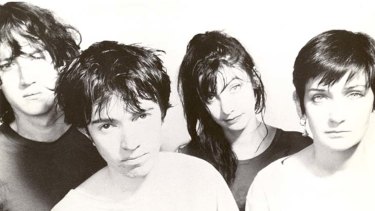 My Bloody Valentine in their shoegaze heyday.

Some things don't change – with Trump in the White House and the ongoing Brexit fall-out, the political future is bleaker than ever and shoegaze is back. Contemporary bands from all over the globe started citing shoegaze as a heavy influence, including Ringo Deathstarr from Texas, M83 from France, Pinkshinyultrablast from Russia and Flyying Colours from Australia.

Adam Franklin, guitarist and frontman with Swervedriver, feels that the reason for the music's longevity is that it hasn't dated.

"I think that the original intent – all-encompassing, aurally emotional music – hasn't gone away and it still moves people," he says. "A lot of the knees-up Britpop that came afterwards now sounds very much of its time, whereas shoegaze still has emotional impact. And the bands that have reformed have all put out new albums and moved in slightly different directions and into new territory."

Andy Bell is in the somewhat unique position of playing in two of the top bands from two of the most influential English rock movements of the '90s – shoegaze and Britpop. After Ride split, he became the bass player in Oasis in 1999. 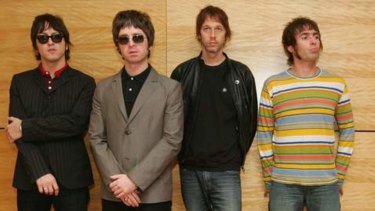 Loveless by My Bloody Valentine (1991)
This is the Sistine Chapel of shoegaze. Obsessive sonic alchemist Kevin
Shields spent three years in 19 studios and reportedly burned through over 40
engineers in order to create this avalanche of shuddering, mind-bending
guitars and dazed, sweetly murmuring vocals.

Nowhere by Ride (1990)
The ocean wave on the cover perfectly encapsulated the grand sound inside
the Oxford quartet's debut album. They'd barely entered their twenties when
they recorded Nowhere, but Ride put their stamp on the genre forever with
these widescreen songs.

Souvlaki by Slowdive (1993)
Rachel Goswell and Neil Halstead's intertwined vocals and fracturing
relationship was at the centre of the second Slowdive album, which was a
bold attempt to expand on their dreamy sound, offsetting feedback with
prettiness and including Brian Eno on a couple of tracks.

Mezcal Head by Swervedriver -(1993)
They always had more of a rock swagger in their Doc Martens than other
shoegaze bands, and on their second album Swervedriver doubled down to
blistering effect, wearing US influences such as Sonic Youth and Husker Du
on their sleeves.

Spooky by Lush (1992)
Shoegaze was a genre with a strong female contingent and Lush were at the
the forefront of the push. Miki Berenyi and Emma Anderson's inventive vocal and
guitar interplay defined the band's ethos, grafting addictive hooks to shimmering ambience.