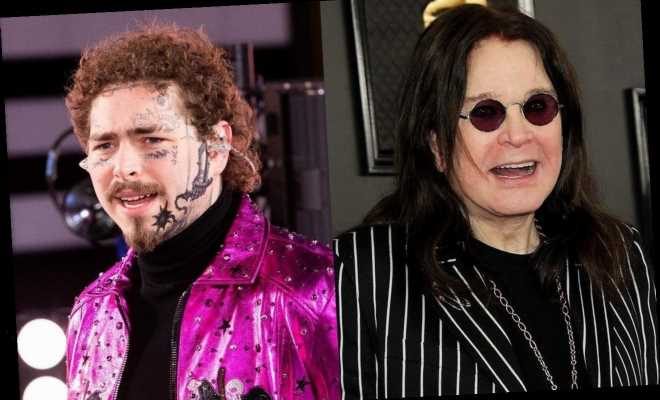 The Back Sabbath rocker and the ‘Congratulations’ hitmaker are scheduled to premiere their music video for latest collaboration ‘It’s a Raid’ during an online watch party.

AceShowbiz –Ozzy Osbourne and Post Malone are to host a watch party of their brand new “It’s a Raid” video on Thursday evening (11Feb21).

The pair teamed up to record the track for Ozzy’s hit 2020 album “Ordinary Man” and now an animated promo is set to be released, with the stars introducing the debut on Ozzy’s YouTube channel at 7pm ET.

The song and video were inspired by an incident at Ozzy’s Bel Air, California home after the rocker set off the security alarm while recording Black Sabbath‘s “Vol. 4” album.

Paranoid Osbourne hid in a bathroom after convincing himself the police officers who arrived to check on his welfare were there to raid the home and arrest him for drug possession.

“I had piles of marijuana and cocaine and I’m shouting, ‘It’s a f**king raid!’ before hiding the drugs and ingesting cocaine while hiding in one of the home’s bathrooms,” Ozzy recalls.

In the video, directed by Tomas Lenert, the rock icon and Post Malone lead police through the streets of Los Angeles.

“Understandably COVID-19 made it difficult to get together to shoot a music video for It’s a Raid, so we opted for this wildly imagined animated video for the final single from the Ordinary Man album,” Ozzy explains.

The song marks Osbourne’s second duet with Malone – they previously teamed up for “Take What You Want” from the rapper’s “Hollywood’s Bleeding” album. The odd couple performed the track at last year’s (20) American Music Awards.