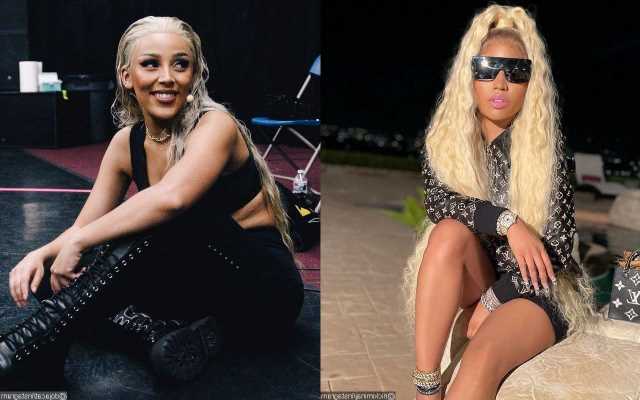 The ‘Anaconda’ rapper reveals on Twitter Spaces that she was actually offered to be on the ‘Say So’ himaker’s ‘Get Into It (Yuh)’ but Nicki decided to turn down the offer.

AceShowbiz –Nicki Minaj is undoubtedly highly-desired features for many artists. The “Anaconda” rapper went on Twitter Spaces in which she revealed that she was actually offered to be on Doja Cat‘s “Get Into It (Yuh)” but she turned down the offer.

Explaining the reason of why she declined it, the Queen femcee shared, “The truth is, she asked me to get on that song.” She went on to say, “It’s not that I’m too busy at all. It’s just, there were middle people involved in that situation, so I had told her, if it was like how me and BIA were direct, and we dealt with each other directly, it would be different.”

The mom of one added that she no longer wanted to “do s**t just to do s**t.” She continued, “So right now, there are a lot of artists, I’m talking about artists that I really like, that ask for us to do a feature/ And I just told all of them like, ‘Yo, let’s really get the right thing.’ Cause right now, it’s a different everything for me.”

“I don’t wanna just do s**t just to do s**t. And especially with artists that I love and stuff, I really wanna make a moment with them that’s gonna last,” the Trinidadian artist shared.

Upon learning her explanations, Nicki’s fans praised the rappers. “IF SHE COULDN’T GIVE HER BEST, SHE DIDN’T DO IT! IT’S RESPECTABLE,” one of the Barbz wrote in an Instagram comment. “She did the same thing with [Tyler, the Creator] she humble enough to decline I love her ugh,” another fan added.

“She didn’t say nothing bad plus she said she loves doja so don’t do that in these comments y’all,” someone added. “she’s right . she don’t need to be on every song & before y’all start saying she’s being a ‘hater’ in the comments she also mentioned that she love the song she just felt like she didn’t need to be on it . it’s a great song by itself,” another supportive fan penned.