The well-coiffed guys from the new K-pop supergroup, SuperM, are sitting around a conference room at the Capitol Records building in Los Angeles, and feeling like they may have left something on the table.

Two days earlier, the seven-piece unit — put together using members from four established K-pop boy bands — had shut down an intersection in the heart of Hollywood and made their live debut before more than 2,000 frenzied fans, some of whom had lined up for days just to get a prime spot to see the guys perform.

For SuperM, the outdoor show — which was also streamed live worldwide on YouTube — served as their official group debut as well, with the boy band finally being introduced to the world after months of secrecy.

“Going in front of our fans and performing as SuperM was nerve-wracking, and it’s not something we usually feel because we’ve all been in this industry for a while now,” says Kai, the pretty, pouty-mouthed singer who was chosen to join SuperM from the band EXO. “There were some members that felt like maybe we could’ve done better with this or stronger with that, but it’s okay,” he says, smiling. “More than anything, I was just proud that we could finally show everyone what we’ve been preparing for.”

SuperM is the latest creation of Korean management company, SM Entertainment (the band’s name is not exactly subtle). Founded in 1995 by Lee Soo-man, a man so famous in Korea he’s just known as “Mr. Lee,” SM is regarded as one of the pioneers of the global K-pop movement, having first brought Korean artists to North America in the early 2000s at the height of the teen pop craze.

SuperM is the company’s latest attempt to make a dent in the U.S. market. After years of breaking all sorts of records in Asia but remaining relatively unknown in the States, the crossover success of bands like BTS and Blackpink have given entertainment companies like SM a renewed interest in reaching the international market, with the U.S. as a pivotal launching pad. 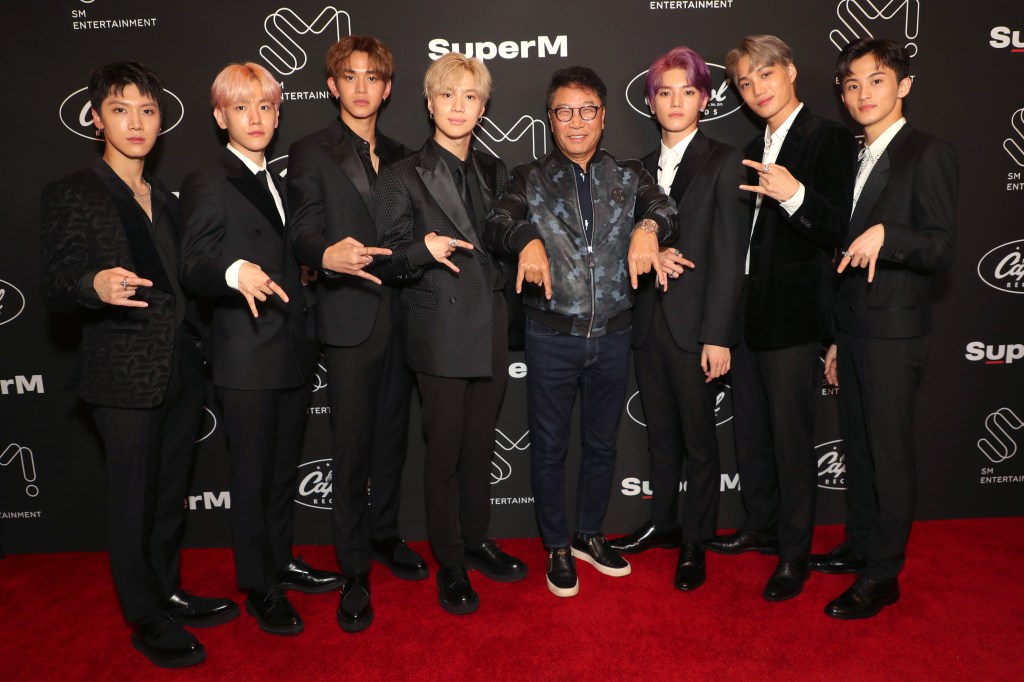 For SuperM, it wasn’t about starting from scratch, but rather starting from the top. SuperM culled its members from some of SM’s most popular groups, who collectively have sold more than 14 million adjusted albums combined, and amassed nearly four billion views of their music videos online. SuperM’s fans lovingly refer to them as “the Avengers of K-pop,” stemming from the belief that the group features the most talented and popular members from each of the individual bands.

Baekhyun and Kai are from EXO, a stylish and well-packaged boy band that has actually sold more records than BTS in Korea. At 27, Baekhyun is the oldest member of SuperM, and has unofficially acquired the title of group leader.

Taemin, the second oldest member at 26, is from SHINee, considered one of the veterans of K-pop, after having debuted in 2008. The group made news in 2017 after founding member, Jonghyun, died from an apparent suicide, which sparked a debate over working conditions and unreasonably high expectations for these young performers, many of whom are pulled from school to begin “training” for their debut.

The last four members of SuperM were culled from subunits of the massive 21-person K-pop group, NCT (Mr. Lee calls them the first “unlimited” boy band, with a constantly rotating roster of new members). Taeyong and Mark are from NCT 127, and Ten and Lucas are from NCT’s Chinese subset, WayV.

The idea for an all-star group was first discussed last year, though the seven members didn’t actually come together to record until earlier this spring. While the guys had met before — SM organizes an annual “SM Town” concert tour, similar to say, when Diddy took his Bad Boy artists on the road — they had never actually worked together until SuperM was formed.

The group’s debut EP, The 1st Mini Album, hit stores last week. The five-song set opens with lead single, “Jopping,” a turbo-charged track whose name comes from a combination of the words, “jumping” and “popping” (a publicist sighed that the name was both crazy yet catchy at the same time). The song mixes hip-hop with EDM, with the members trading verses in both English and Korean. The video for “Jopping,” meantime, was filmed in Dubai over the summer and has already amassed more than 22 million views online. Fueled by massive buzz for the song and album, SuperM announced this week that they will be hitting the road for a North American tour, kicking off November 11th in Fort Worth, Texas. 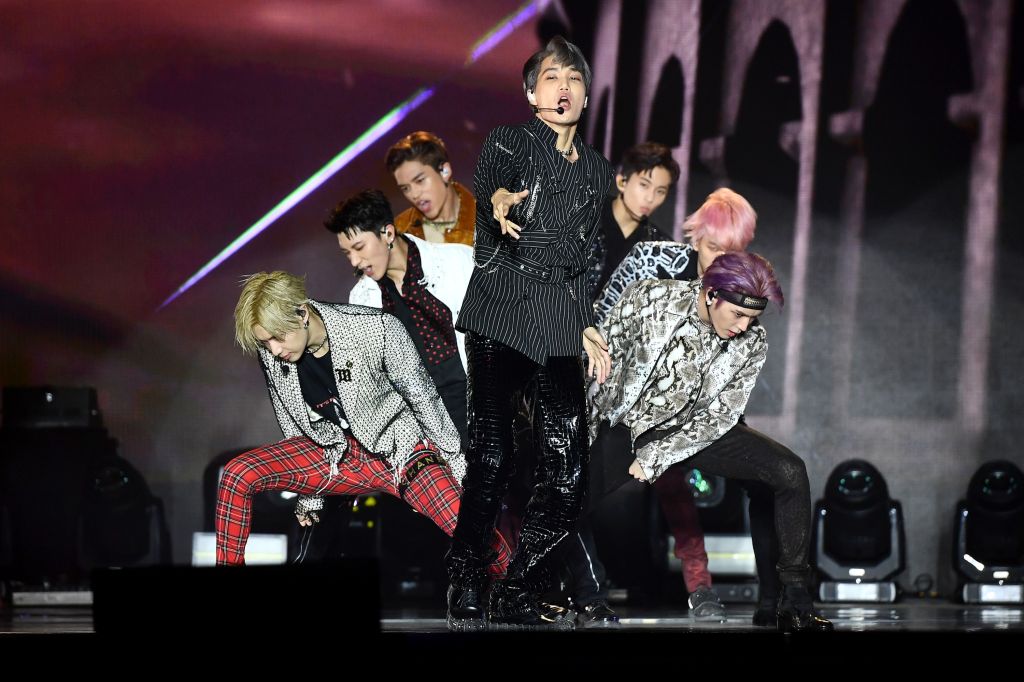 While BTS have blasted into the mainstream, with solid radio play, appearances on all the late-night talk shows and even Grammy buzz, the guys in SuperM believe there’s room for another K-pop boy band to succeed as well.

“Yes, the competition exists and we can’t ignore that,” says Taemin, “but we don’t want to step on other groups to get to the top. We want to stand alone as a group and bring something fresh and new to this K-pop scene.”

To that end, the group has been working on carving out a more signature sound for their debut LP, which will still sit comfortably in the hip-hop/pop/R&B arena, but also see them weaving in and out of different genres within a single song. While other groups — such as Blackpink and BTS — primarily perform in Korean, SuperM could also be releasing more English language tracks. (Though Mark was born in Canada and speaks fluent English, the band’s publicist confirms the rest of the group’s members have been taking English lessons.)

They’ve been doing their homework too, listening to the radio while they’re in Los Angeles and streaming an eclectic mix of artists like H.E.R., Ella Mai, Daniel Caesar. and Billie Eilish (“Let’s get that collabo!” Taemin hollers).

And while Korean management companies are notorious for controlling their groups’ images and keeping their artists on a short leash (I once arrived to meet EXO in Seoul and was told I couldn’t interview the guys in person because they didn’t have their makeup on), from this perspective, SuperM feels a lot… looser.

On this recent swing through L.A., the young men reveal that their first stop after landing at LAX wasn’t straight to their hotel, but rather to In-N-Out. Though they’ve booked dinners in Malibu, the members also rave about the traditional Korean tofu stew at BCD Tofu House, a 24-hour Southern California chain of cheap eats (“It’s honestly better than Korea,” Taeyong says). During the interview, the guys are decked out in leather jackets and oversized sweats, sipping on iced coffees from Starbucks, and fidgeting with their phones like any other twenty-something, as they dish about trying to take a group vacation after their tour is over. They travel with a translator, but all of them try valiantly to respond to questions in English before they crumble in laughter when they lose their words. If their original groups gave them a crash course in making it in the music business, it seems SuperM will give these guys a chance to be themselves — and in doing so, a chance to grow.

“If I said I didn’t feel any pressure that would be a lie,” says Kai. “We all come from successful, established careers, but in a way, we are still unknowns, at least when it comes to this formation. But with that pressure comes this new level of excitement,” he continues, “because there’s so much more we can try and do, and the possibilities are endless.”

“There are a lot of groups out there and a lot of competition,” Taeyong admits, “but our goal is to make K-pop shine even brighter. The spirit of competition is not necessarily bad, because it pushes us to want to put out better things.”

Kai is more specific: “SuperM is here to level up the K-pop genre,” he asserts. “We are ready for K-pop to start raising the bar.”