The producer of the biggest-selling album of all time wanted to produce Jacob Collier's first.

Politely rebuffed, Quincy Jones became the London artist's manager instead. On this night it was easy to hear why the Thriller-maker was so interested, but also the folly of anybody trying to direct Collier's sound.

What would count as a highlight moment in an ordinary mortal's concert seemed to arrive every minute or so in this two-hour marvel. 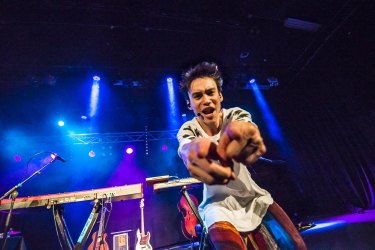 Jacob Collier is laying claim to be one of the best musicians going around today.Credit:Kim Rudner

Running on in an oversized white T-shirt and red-and-blue balloon pants, the 25-year-old might have passed for a trap DJ. By about a minute into opener With The Love In My Heart, having swooped all over his band's cluttering funk track with his supple baritone, whilst propelling it with manic drumming and a lightning-fast jazz piano line, he was already laying claim to being one of the best musicians going around today.

Next was Djesse, the title track of a four-album multi-genre excursion that the autodidact began releasing last year. But the song like many tonight was merely a starting point for improvisation, Collier's four-piece navigating frequent shifts in mood and tempo, the star showing off deft double-bass playing and a blistering vocoder solo.

Technology played a part in this show's success, especially the "harmoniser", a keyboard-like gadget that split the former opera singer's voice 12 ways and lent an epic quality to tunes like the joyous Hajanga and a super-syncopated Fascinating Rhythm.

But old-fashioned songcraft was as important, evident in the gorgeous melody of Hideaway (where, no surprises, Collier also showed he's a guitar player of rare dexterity and lyricism). His ambitions as a serious composer were also there in a luminous overture he wrote for Portuguese experiment Lua, played on this night by a sextet from the Australian Chamber Orchestra Collective.

Stage presence was another factor, Collier taking Freddie Mercury's old call-and-response tricks and running with them. He split the crowd into three-part harmonies, dared us to replicate his remarkably deep voice, and conducted the singalongs for volume and dynamics with frantic yet instantly understandable gesticulations.

His abundant musicality rubbed off: by the closing chorale reinvention of The Beatles' Blackbird, we were sounding pretty good.

Some of this night's music was more cerebral than soulful – Collier would have to spend a lot of time in a bubble practising and arranging this stuff.

But a jaw-dropping take on Daniel Caesar's bluesy Best Part hinted that with time, his music's emotional punch will match its virtuosity. It will be a must-see, must-hear journey.