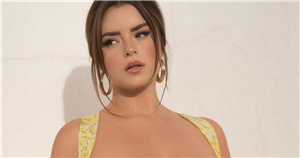 As someone who is never shy to flaunt her amazing curves, Demi gave her 16.4million Instagram followers something to talk about, after she wore a plunging yellow bikini.

The Pretty Little Thing Model had pulses racing as she almost spilled out of her low-tailored bikini top that accentuated her cleavage.

The flowery top also had sleeves which gave the look a bardot effect.

Demi, 26, accompanied the outfit with matching yellow knickers that sat perfectly on her hips.

Teaming the look up with gold chunky earrings, Demi wore her brunette locks in a bun and allowed a couple of strands to flow down her cheeks.

The brunette bombshell also posted a side profile pic that allowed fans to see a glimpse of her peachy bottom.

Captioning the promotional post, the star wrote: "Summer is that you?"

Demi’s fans couldn’t help but admire what they had seen and took to the comment section to share their adoration.

While another supporter claimed Demi made their birthday complete: "Yes my favourite model posting a nice picture on my birthday. Just made my day."

While others showered the star with love heart eyes and fire emojis.

Last month, Demi got tongues wagging as she uploaded a picture of herself surrounded by several white roses.

Posing beside the dozens of flowers, many fans suspected that it may have been sent to her by a secret admirer.

One fan commented: "Are there any footballers here?"

British model Demi uprooted from the UK and moved to Ibiza last year. The star made the big decision while in lockdown.

Explaining why she decided to move the brunette babe said: "I had up and down days, and with so much time on my hands, I obviously had a lot of time to reflect on things, I felt very sad."

"I have loads of friends out here, the weather is nice, and it is a perfect backdrop for my modelling work."