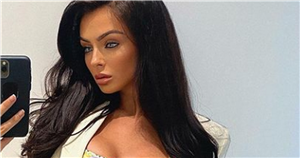 Love Island beauty Kady McDermott had her fans in a frenzy on Friday, after she posted a photo of herself wearing a very tight fitted floral two-piece outfit.

Squeezing into her skintight bandeau top, Kady's boobs almost couldn't contain themselves as she put on an eye popping display.

Looking every bit ready for summer, the star added a cream tailored jacket and held a pair of baby blue sun glasses in her hand.

Fans of the former Love Island contestant couldn't get enough of what they saw and rushed to the comment section to share their love.

One fan penned: "OMG how can someone be so perfect? WTAF! Queen!"

While a third said: "You are absolutely stunning."

Last week, Kady informed her fans that she is now single again after she split from her her boyfriend, TOWIE's Myles Barnett.

The reality star confirmed the news to her followers after she was quizzed on her relationship status.

The split came as a surprise to some, as the former couple spent thousands of pounds renovating a property with plans to move in together.

The pair had purchased their home in April last year and have been working on the pad since then.

Speaking about their relationship last year, Kady told OK! Magazine: "If we were getting on now, properly for two years, not 2021 but like 2022, that would be ideal to get engaged."

But by March 2021, things became evidently rocky for the couple as they confirmed they were taking a break.

Talking about former couple in March, a source told The Sun: "Kady and Myles are spending some time apart right now.

"They decided to go their separate ways while isolating but are hoping to get things back on track and move into the new place together.

"They split once already last year but have been determined to make things work after purchasing the bungalow and starting extensive renovation on it."

Kady shot to fame alongside Scott Thomas on Love Island, but they split not too long after the series ended.