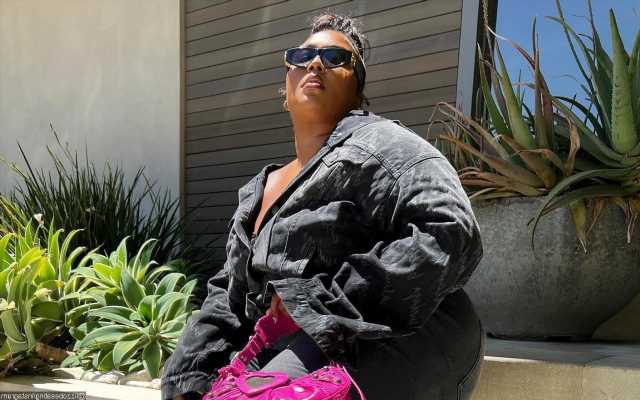 The ‘Truth Hurts’ singer recently dubs her much-awaited fourth studio album ‘Special’, which is the follow-up to 2019’s Grammy-winning ‘Cuz I Love You’, a ‘bad***’ album.

AceShowbiz –Lizzo has released her empowering new single “Grrrls”. The Grammy winner has released a follow-up to mega-hit “About Damn Time”. The song sees the singer chanting on the catch chorus, “Where my girls, where my girls at?”

Meanwhile, Lizzo is set to be the subject of a new documentary about her rise to superstardom. The Good as Hell’ hitmaker’s currently untitled film for HBO Max is set to be directed by Doug Pray, who was heavily involved in the four-part HBO docu-series “[The Defiant Ones” about [cDr. Dre] and [cJimmy Iovine]’s rise to the top.

Lizzo’s film will tell “the inspirational story behind her humble beginnings to her meteoric rise with an intimate look into the moments that shaped her hard-earned rise to fame, success, love, and international stardom.”

The chart-topper hopes to inspire aspiring creatives to stick with their dreams by sharing how she powered through the ups and downs on the road to becoming a global superstar. The 34-year-old musician said, Growing up I never dreamed I’d get to experience all of the things I’ve accomplished in my life, and I’m just getting started.”

“From ‘Cuz I Love You’ to my dramatic world tour, losing and gaining love, and creating my new album ‘Special’, y’all get to see the amount of time, patience, blood, sweat and tears that went into this process. It takes ten years to become an ‘overnight success,’ and hopefully I can inspire other young creatives to keep going,” she continued.

The classically-trained flautist recently declared she is worthy of the “attention” she has garnered throughout her career as she has earned it. She elaborated, “I deserve the spotlight. I deserve the attention. I’m talented, I’m young, I’m hot, you know? And I’ve worked hard.”

Born Melissa Jefferson, the musician believed she had to “blaze a trail” for herself as there was no one like her on the music scene. “I had to blaze a trail. There was no Lizzo before Lizzo,” she noted.

Ahead of the film’s release later this year, Lizzo will release her new album “Special” on July 15.