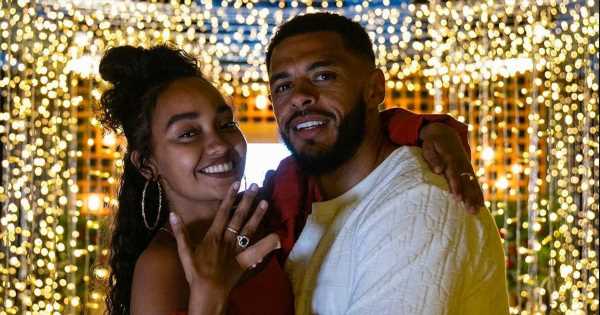 Leigh-Anne Pinnock was reportedly forced to buy back her stolen £40,000 engagement ring after tracking it down to a pawn shop.

The Little Mix star, 29, was allegedly contacted by a pawn-broker who said he bought the emerald and diamond-encrusted ring, originally given to her by her fiancé Andre Gray.

He reportedly realised the gold band belonged to the songstress, who is said to consider it to be her most "treasured possession" after pictures of the unique ring were published in the national press.

Watford FC star Andre and Leigh-Anne were allegedly tipped off about the ring's whereabouts and paid to take it home from the shop on May 25 after identifying it and being told it had changed hands seven times before reaching the trader.

A friend of the star reportedly told The Sun: “It’s amazing really, but they actually managed to get the ring back.

“It had gone through seven different pawn shops before the final one realised what it was and called Andre.

"He went round and sure enough it was her ring, so he bought it back."

The pal claimed it was never about the money for them – just "sentimental value".

They continued the "main thing is Leigh-Anne has her ring back," adding "nothing could replace that bit of her fairytale".

The pair reportedly discovered the ring the day after it was claimed in the press it had been pinched as they moved from their £4.5million mansion in Surrey last month.

Leigh-Anne and Andre relocated to a new home closer to the footballer's Watford training base.

The alleged theft left the pair so shocked they removed some of their items left in storage and brought them to their new home.

Sources close to Leigh-Anne last night said they were “one hundred per cent certain” the ring was taken by an intruder.

Police are investigating the incident but have not identified any suspects.

A spokeswoman for Surrey Police said: “The ring has been returned to its owner. No suspects have been identified or arrested. Inquiries remain ongoing.”