Former Germany player and manager Klinsmann has revealed that he loves England’s iconic Football’s Coming Home chant so much that he took it back to Germany with him. He recalled first hearing it while watching Germany’s clash with England in the Euro 1996 semi-final at Wembley Stadium, which the visitors won on penalties.

He told the Guardian: “I pulled my calf muscle in the quarter-final against Croatia. It forced me to watch the semi-final [against England] from the stands.

“The whole stadium erupted and were singing Football’s Coming Home. It gave you chills; it didn’t matter whether you were English or German. That was unforgettable.” 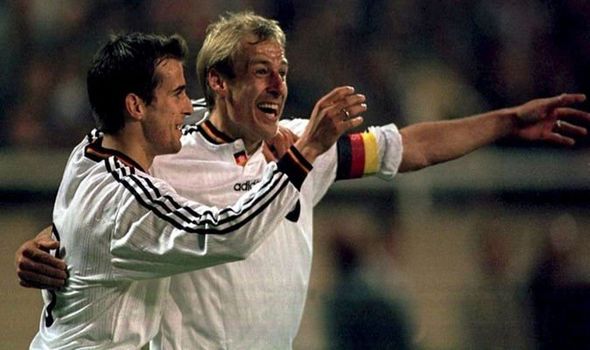 “We loved that song and we sang it throughout the tournament. We sang it on the balcony in Frankfurt after the final and the crowd didn’t really get it, but it became very popular in Germany after that.”

It comes as Germany mentioned the iconic chant yesterday when their official Twitter account said: “It’s Coming Home… It’s @England in the last 16 in Wembley.”

Despite Germany’s win, Klinsmann also spoke of his admiration for Paul Gascoigne and his iconic goal against Scotland in the knockout stages of the tournament.

Klinsmann said: “We all watched that game. We were just freaking out when Gascoigne scored that goal.

“Honestly, there is no German player who is not a fan of Gazza.

“Then the celebration when Teddy [Sheringham] is squeezing the water bottle, it was fantastic.

“Two sets of amazing fans, pure excitement, pure entertainment. And then you have Paul Gascoigne on the field, that just takes it to another level.”