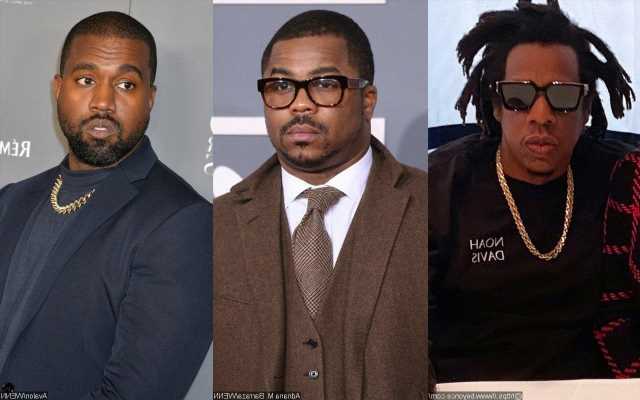 Kanye name-drops Just Blaze after he is asked to pick between Swizz Beatz and Just Blaze during a segment called ‘Quicktime with Slime’ in his appearance on ‘Drink Champs’.

AceShowbiz -In the aftermath of Kanye West‘s wide-ranging interview on the “Drink Champs” podcast, Jay-Z has responded to the former’s comments about producer Just Blaze. During a Twitter Spaces chat to promote Netflix’s “The Harder They Fall” on Friday, November 6, Jay-Z decided to defend Just Blaze after Ye called him a “copycat.”

Hov said that Kanye’s comments about Just Blaze’s involvement in his 2001 album “The Blueprint” were “unfair.” He noted, “If you’re making an album, if you’re creating an album and the assignment is soul samples, everyone’s coming with soul. It’s not you trying to make a cohesive piece of music.”

“I don’t think anyone was copying off anyone. You know Bink! has this problem and you know I think everyone created for the project,” Jay-Z continued.

The husband of Beyonce Knowles went on to say, “But the thing was, the baby was The Blueprint and I think everyone should be prized for what we created. You know it’s in like — I don’t know what you call — at the Library of Congress or something. It’s like it’s something that we all should or you know their contribution.”

Kanye name-dropped Just Blaze after he was asked to pick between Swizz Beatz and Just Blaze during a segment called “Quicktime with Slime” in his Thursday appearance on “Drink Champs”. Of the producer, the “Donda” artist said, “He get credit for ‘The Blueprint’, and I did the first half of ‘The Blueprint’, and he just copied my half. I mean look where I’m at today and look where he at today. So that should show you…”

As for Just Blaze, he responded to Kanye’s remarks in an Instagram post. “Well that was unfortunate. I’m only addressing this publicly because it was stated publicly. I’m not here for mudslinging, I’m just a bit confused and disappointed,” so he said on Friday.

“None of what was said tonight regarding me fits with any of our history or our previous interactions – particularly in light of very recent attempts to work together again,” he added. “Through recent years he has reached out to collaborate on various projects, including a much rumored collaborative project that he was looking for me to handle a good amount of.”