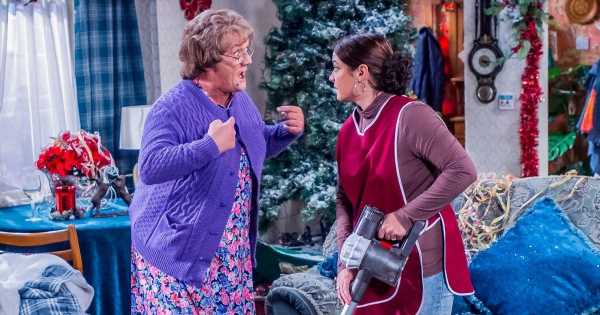 Fiona O'Carroll is very well known for her role of Maria on Mrs Brown's Boys and also stars on the show alongside her famous father Brendan O'Carroll as well as other family members.

But who is Fiona away from the cameras?

Fiona is originally from Dublin and her birthday is September 14, 1980, making her currently 41 years old.

She is married to her co-star and television producer Martin Delany, who is also on the show playing the character of Trevor Brown.

The pair were married in 2006 with their family and friends present.

Fiona is also part of a famous family as she is the daughter of Brendan O'Carroll and she stars alongside her brother Danny O'Carroll, who plays Buster Brady on the show.

Fiona's character is named after her auntie Maria who is Brendan's sister, however she passed away last year, leaving the family heartbroken.

Brendan paid tribute to his sister by saying that he had learned a lot from her and that all of his "good points" came from her.

Fiona's character comes from a posh and wealthy family and is married to Agnes' son Dermot, and she is mother to sons John, George and Ringo.

The star has been in each of the series of the show as well as the spin off chat show All Round to Mrs Brown's and Mrs Brown's Boys D'Movie.

Mrs Brown's Boys is an Irish-British TV sitcom which was originally created by Brendan O'Carroll and produced by BBC Scotland.

The show adopts an informal approach and mistakes made by the cast are often kept in the final cut of the show.

Despite receiving harsh reviews by critics in the past, the show has become a success in Britain and Ireland where it is set.

It has also got high ratings in Australia, Canada and New Zealand.

It has also won numerous awards.