Natasha Khan has long taken refuge in worlds she couldn't see. Khan, 39, the acclaimed
British-Pakistani musician better known as Bat for Lashes, grew up in Hertfordshire, the kind
of leafy English county that lent itself to childhood daydreams. Eighties children's films were
on high rotation. Their ethereal atmosphere leaked into daily life. 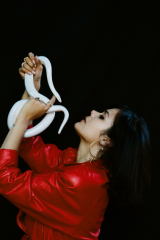 "When I was small I remember watching The Goonies and ET, musical films that had their
own mythology – I watched The Wizard of Oz over and over again," she says over the phone
from London, the line betraying a near-audible grin.

"Then, when I got a little older, two of my older girl cousins came to live with my family and they introduced me to loads of music that is still very important to me. Bjork and Radiohead but also Kate Bush's Hounds of Love. I lapped up anything that was telling me a story that my imagination could delve into."

To combine the sonic with the fictive is a move as old as music. David Bowie had Aladdin
Sane, the harder-edged heir to the artist's space-alien persona Ziggy Stardust. Hounds of Love
is peppered with references to great writers: James Joyce, Emily Bronte. Khan's voice, a
soprano that keens and howls and soars over lyrics that drip with secret meanings has a
quality that's hypnotic. It lulls you, like all good stories. But Khan has always invented
worlds in which her songs can roam.

There's the quasi-mystical realm of Two Suns, the cult 2009 album which casts Khan as a
shaman and is filled with propulsive anthems – Daniel, Pearl's Dream – whose allusions to
twin moons and blue skies evoke the strange, star-crossed orbit of being in your twenties.
There's 2012's The Haunted Man, a rich, melodic ode to bruised masculinity inspired by an
English grandfather who returned from war, broken.

Khan's new album, Lost Girls, again conjures a universe. But the record, which sees the artist
inhabit a character called Nikki Pink, is altogether lighter and freer. The album's first track,
the shimmering Kids in the Dark, is steeped in the thrill of romance and the magic of the
California desert. It's also, Khan says, a homage to all the films she loved growing up.

"I've always used characters as a creative construct because it helps me have cohesiveness
around the instrument, drum and colour choices," says Khan, who's passionate and
surprisingly earnest. "For me, everything about building a world is about choices and if you
have archetypes and characters and storylines, it contains the manifesto for the record
[itself]."

She dissolves into laughter that's unguarded and warm.

"When I moved out to LA I wanted a break from music," she says. "I have old friends who
lived there and I wanted creative community. I wanted to cook. I got a dog and fell in love.
But then there's side of LA that's very suburban with these hazy sunsets and gardens and
Halloween masks that you drive past, and that energy seeped into me. It was very
spontaneous when the music came."

Music was her chosen medium because it opened doors to different forms of artistic expression.

Khan was born in north-west London and grew up in Rickmansworth, Hertfordshire. Her
mother is English and her father, Rehmat Khan, a famous Pakistani squash player. She started
playing piano at nine, later studying music and visual arts at the University of Brighton.
Music was her chosen medium, she says, because it opened doors to different forms of
artistic expression.

"Music is the best way for me to express myself, but it also allowed me to create album
artwork and videos and [explore] my love of fashion and dressing up and characters," she
says. "I've always put a lot of energy into other mediums, doing courses in painting and
writing. I feel like I have a responsibility to know myself as best as I can."

Khan recorded her first album, Fur and Gold, while teaching at a nursery school. The 2006
record, all twisted vocals and dirge-like percussion, put Khan, who later relocated to
Brooklyn, squarely at the centre of the wave of New York bands experimenting with nu-folk
and electronica. But unlike some of her counterparts, Khan (largely) abandoned the scene's
pick-and-mix sensibility, going on to make increasingly assured and avant-garde music.

Her 2016 concept album The Bride, tells the story of a bride whose would-be husband dies in
a car crash. The record was accompanied by moody album art, shot by the photographer Neil
Krug, featuring the artist wearing a veil on a highway. (The veil stayed for sets at
Glastonbury and Coachella.) It also coincided with a short film that was written and directed
by Khan and premiered at the 2016 Tribeca Film Festival called I Do.

"As I get older I'm drawn to directing and taking photographs," says Khan, who released
Sexwitch, an experimental album with Dan Carey of English rock band Toy, in 2015. "I've
become more interested in creating stories in a visual way."

The Bride marked the end of Bat for Lashes' recording deal with EMI and Khan owes at least
part of her metamorphosis to her newfound independence.

What comes out is what comes out. I’m a fierce believer and protector of the artistic process and its cycles.

"With every album I've made I've never changed it to accommodate anybody else," says
Khan, who won a 2019 Ivor Novello award for scoring the BBC drama Requiem and has been
nominated for the prestigious Mercury Prize three times.

"What comes out is what comes out. I'm a fierce believer and protector of the artistic process and its cycles."

Unsurprisingly, Lost Girls, which was co-produced with composer Charles Scott IV, started
out as a movie script and the album's defining register is filmic. Kids in the Dark, originally
written for a Stephen King show, stars Khan as a vampire, who follows her lover through the
sun-splashed LA suburbs. In The Hunger, the artist conducts a séance in the desert, flanked
by a group of high priestesses. The songs, too, are intensely cinematic. Kids in the Dark
revolves around synth arpeggios that build to an emotional crescendo, recreating the intensity
of being a teenager. Jasmine and Feel for You are unashamedly sensual, drum patterns
summoning that primal rhythm that always culminates in dance.

Khan says that Lost Girls feels like her purest musical response to this cultural moment. It's
also, she says a little dreamily, about the unseen forces that can inform new realities.

"If you look at Matisse's churches or Michelangelo's paintings, they transport us, make life
more beautiful," she says.

"Everything is so doom and gloom right now and I'm not ignoring it. But I want to provide a counterbalance of love and beauty and empowerment. I think the more contact we have with our feelings, the more chance we have of creating new paradigms that work for everyone."

Lost Girls is out via AWAL Recordings on September 6.