Los Angeles quarter Fidlar have earned a reputation as a reliable, raucous party band, and tonight they stay very much on-brand with blistering opener Alcohol and its immediate follow-up, Cheap Beer. 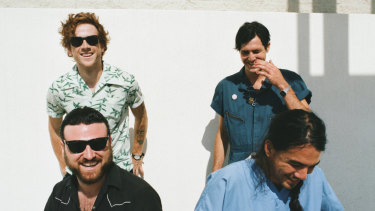 Fidlar give audiences exactly what it says on the tin.

The songs may highlight the lack of thematic diversity in the band's repertoire, but Fidlar are, if nothing else, a band that does do exactly what it says on the tin (or in this case tinnies, several of which go flying above the heaving mosh pit throughout the night).

You have to feel a little for diminutive frontman Zac Carper, now post-rehab after kicking hard drugs, but still beholden to screaming out odes about getting completely annihilated.

There are nods to this conundrum on recent radio-friendly single By Myself with the lyrics, "Why does getting sober make you feel like a loner?", but it hardly seems to dampen Carper's enthusiasm, the singer giving an affectionate shout-out to the "pissed idiots" down the front who are enjoying the kind of partying he now only sings about.

40oz On Repeat (no prize for guessing what that one's about) scores one of the biggest reactions of the night, the band even slipping in a fun cover of Weezer's Undone – The Sweater Song in the middle just for the hell of it.

Carper instructs the mosh-pit to make a safe 'girls only' space.

There's some generous interaction with the crowd from Carper, who at one point instructs the mosh-pit to make a safe "girls only" space down the front for the remainder of the set, which seems to quell the aggressive, dude-heavy dance floor for a period that doesn't last quite long enough.

Regular instrumental jams serve as welcome palate cleansers between the more breakneck-fast punk songs played with a livewire intensity by the band – perhaps none more so than the head-banging Brandon Schwartzel, possibly the most animated bass player to slap a four-string since Flea.

A party-hearty encore of Cocaine and Wake Bake Skate ends the show with a bang, but as Carper sings above the rapt audience while gleefully crowd-surfing, you have to wonder where to next for the 30-year-old singer and his band now they're likely starting to figure out there's more to life than getting unrepentantly wasted.