At the ‘New Rules’ hitmaker’s ‘Future Nostalgia’ concert at the Scotiabank Arena, some fans in the crowd set the explosives off, leaving three concertgoers with ‘minor injuries.’

AceShowbiz -A number of Dua Lipa fans were injured at her concert when fireworks were set off. The “New Rules” hitmaker was leaving the stage after completing her performance for her “Future Nostalgia” world tour at the Scotiabank Arena in Toronto, Canada on Wednesday, July 27 when fans in the crowd set the explosives off and leaving three concertgoers with “minor injuries.”

Following the incident, Constable Cindy Chung said, “No one was required to be transported to the hospital by an ambulance, the injuries were minor.” Meanwhile, one concertgoer explained that the audience first assumed it was part of the show’s finale but when it transpired that the explosives had been off by an attendee, things became “hella scary.”

The concertgoer told PEOPLE, “It was at the end, during her final song, and confetti was already out, so we thought it was part of the finale. No one was fazed by it other than the people in the pit, [but it was] hella scary.”

According to reports, no damage was done to the building by the fireworks and “Levitating” hitmaker Dua took to her Instagram Stories on Thursday to tell fans she was “shocked and confused” by the incident and apologized to those who felt “scared or unsafe.”

“Last night, unauthorized fireworks went off in the crowd during my set in Toronto,” the 26-year-old pop star wrote. “Creating a safe and inclusive space at my shows is always my first priority, and my team and I are just as shocked and confused by the events as you all are.” 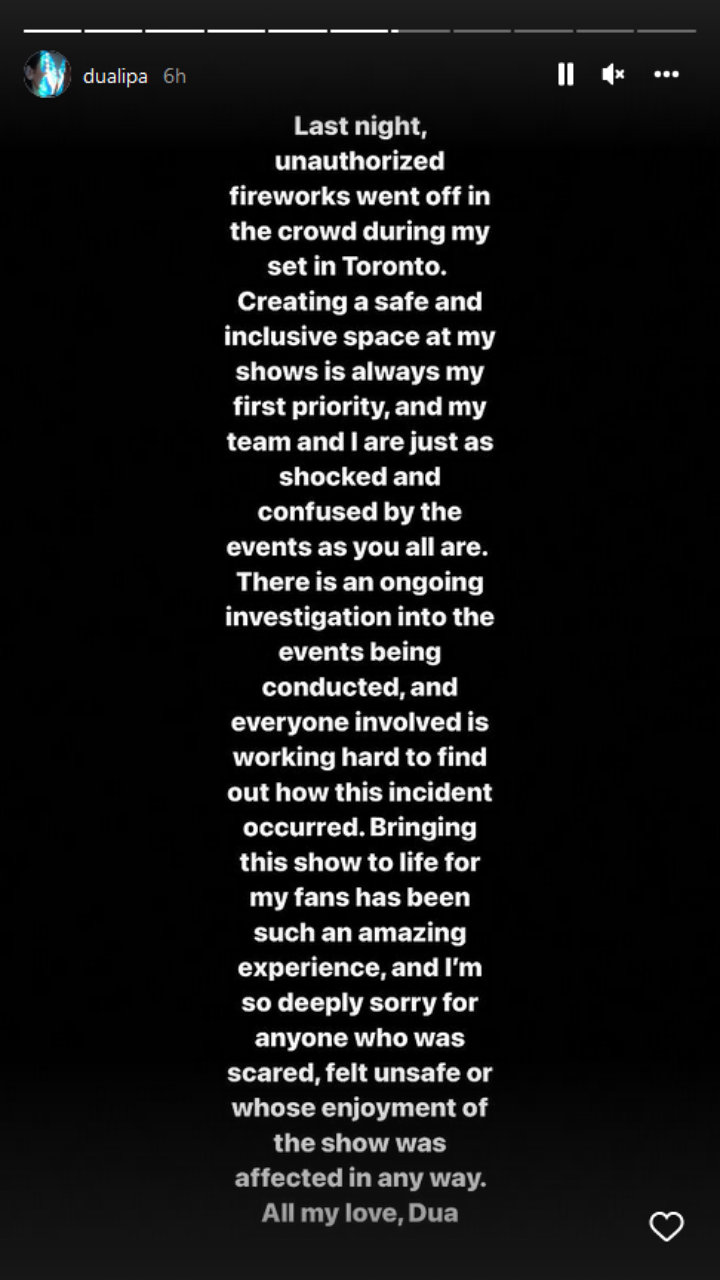 Dua Lipa apologized about the fireworks incident at her Toronto show.

“There is an ongoing investigation into the events being conducted, and everyone involved is working hard to find out how this incident occurred,” she continued. “Bringing this show to life for my fans has been such an amazing experience, and I’m so deeply sorry for anyone who was scared, felt unsafe or whose enjoyment of the show was affected in any way. All my love, Dua”