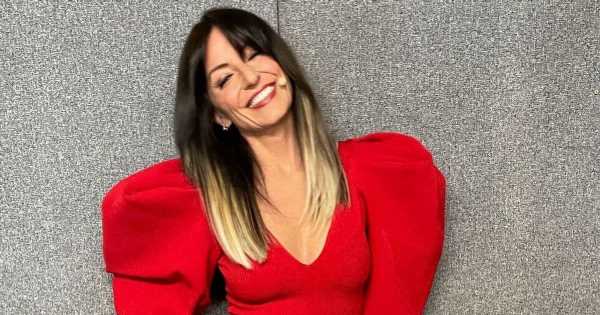 Davina McCall has wowed fans by showing off her bold new look for the first episode of The Masked Dancer.

The Big Brother legend is part of the four-strong panel who will be trying their hand at guessing who the celebrities are behind the masks are on the latest spin off of The Masked Singer.

Not long before the programme landed ITV, fans were treated to a backstage snap of the former Channel 4 host.

Hair dresser to the stars Michael Douglas showed off his handiwork on Davina via his Instagram earlier this evening.

The British TV regular could be seen in a plunging v-neck red dress with huge puffed up sleeves making for a typically bold debut to the series.

But something else caught the eye of fans as they noticed she was sporting a balayage which added some blonde into her poker-straight hair.

Michael explained how he’d managed to create the look which was not all as it first appeared.

“Hair was a temp Balayage with some help from @pakcosmetics 1 pack of double weft extensions and @philsmithbegorgeous root touch up.

“Very simple to do on straight hair or ever easier to disguise on wavy textured hair.

He went on to add: “I used straighteners in conjunction with some heat defence spray on dry hair and added texture with @livingproofuk and some blending colour with @philsmith12 root touch up.

“We loved it and of course no peroxide was used in the creation of this hair doo! [laughing face emoji].”

The celebrity hair stylist gushed over his time working behind-the-scenes on the show alongside the all-star panel.

He concluded: “Hope you all enjoy the show. Always a pleasure to work on this production.”

Fans quickly took to the comments to express their love of Davina’s slightly switched up look. Another commented: “Wow looks amazing! It so suits Davina’s personality love this woman she is so inspirational x.”

“She looks fab and she needs to wear more red,” a third weighed in.

Complimenting Michael’s skills, a fourth probed: “So u just sprayed root touch up on the hair and u got faux balayage?? Genius x.”

It comes after it was announced Oti would be replacing previous panellist Rita Ora ahead of the spin-off series.

Newcomer Oti previously revealed her “girl crush” on her co-star Davina ahead of the new series launch.

She told The Sun: “I’ve got such a girl crush on her. I call her ‘Hot momma’ because she is hot.

“Her body — oh my God — is absolutely insane. She's such an inspiration. She looks amazing.”