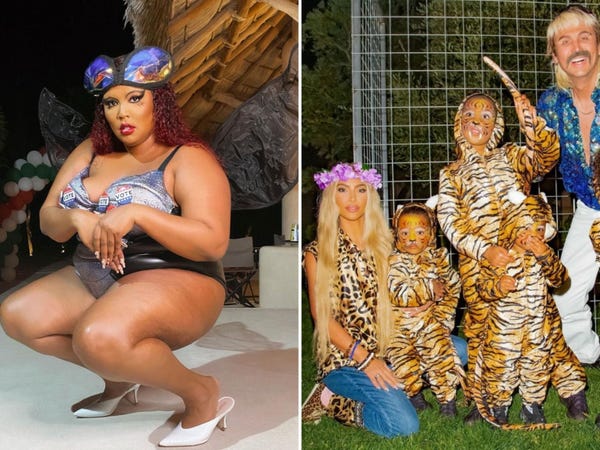 Celebrities are commemorating 2020 — from the US presidential election and the coronavirus pandemic to the many memes and pop culture moments that have taken over the internet in a turbulent year — with their Halloween costumes.

For starters, Lizzo took a note from what's considered to be one of the most viral moments from the vice-presidential debate: when a fly landed on Vice President Mike Pence's head and appeared to sit in his white hair.

On Instagram, the musician wrote: "FLYYYYY AF ! #halloween2020," and shared two pictures: one showing off her outfit, and another where she's edited in front of a picture of Pence's head. The "Truth Hurts" singer's costume included insect-like wings and eye details, and her metallic top was adorned with "Vote" stickers.

Fans of the singer commented on Instagram that she's "won Halloween" this year with her costume.

Earlier in October, Steve Martin also poked fun at turning Vice President Mike Pence's fly moment into a costume for the fall holiday. The actor shared a picture of what appears to be a small bug in his hair and wrote: "My Halloween costume arrived!"

But the iconic insect isn't the only meme or 2020 moment that has inspired celebrity Halloween outfits.

Some stars drew inspiration from "Tiger King: Murder, Mayhem and Madness," the Netflix docuseries about America's most infamous tiger breeders, which captivated audiences earlier in the year.

Kim Kardashian West, who's known (along with her family members) for wearing elaborate Halloween getups, shared a picture of her "Tiger King"-inspired costume.

The reality star dressed as animal activist Carole Baskin, complete with a floral headpiece and a blonde wig. Kardashian West's four kids wore big-cat-inspired costumes, and her friend, Jonathan Cheban, was pictured in a costume inspired by Joe Exotic (whose real name is Joseph Maldonado-Passage), the disgraced former zoo owner who was featured widely in the series.

Kelly Ripa and Ryan Seacrest also leaned into the "Tiger King" hype for a Halloween special on their "Live" show. In one scene, Ripa dressed as Baskin, and Seacrest wore a blue metallic shirt and blonde wig inspired by Exotic's appearances in the Netflix series.

As Seacrest shared on Instagram, the duo also sported second "Tiger King" outfits as part of the show, which included Ripa being made to look like the tiger breeder.

Some stars' costumes seemed to simply embrace the tumult of 2020 — such as Rebel Wilson's pandemic warrior ensemble. The actress debuted her Halloween look in an Instagram video, and it's complete with a depiction of the novel coronavirus hanging from the tree behind her.

"Just call me: RONA (Warrior Princess) …destroying 'rona wherever I go," the actress wrote on Instagram.