For this year’s annual Women Shaping the Future issue, we asked 12 of today’s top musical acts to talk about the women who have inspired them most in their lives and careers. Here, Brandi Carlile talks about what the Indigo Girls meant to her as a young fan, how they helped her early in her career, and how they’ve become close friends.

The Indigo Girls were so deeply influential in my life — not just musically, but also as an activist and as an out queer person. The representation and the visibility that they managed to scrape together at that time, despite all odds and all the obstacles against them, were really important for me in my life. I needed them.

I was about 13 or 14 years old, and I had come home from a friend’s house — it was a girl who I had a total crush on — and I was very confused about it. I got home, and my parents had rented the movie Philadelphia on VHS. I snuck it into my bedroom, popped the movie into my VCR. Obviously, it’s about a gay man who has AIDS, who gets fired from his job, and he’s made a pariah. He fights for himself and other LGBTQ+ people and people with HIV/AIDS, until he dies at the end. It’s a dreary subject matter, but it was so poignant to me that I felt this pull in my stomach. In retrospect, I realized that I was being galvanized towards something that I was only just beginning to understand about myself.

In the film, I heard these women singing this song: “I don’t wanna talk about it, how you broke my heart…” I asked for the soundtrack for Christmas, and I got it, and that’s when I really heard the Indigo Girls. I was already a musician — I was obsessed with Elton John, I was learning to play songs on the keyboard, and I had been singing since I was eight. But the Indigo Girls were a fork in the road for me, and because of them, I went in a different direction, not just musically, as I’ve pointed out. One of my friends at school owned Swamp Ophelia, and it was backwards from there: Nomads Indians Saints, Rites of Passage, Strange Fire, Indigo Girls. It was huge for me.

The other thing was their harmonies. My brother, who is only 11 months younger than me, we’ve been singing harmonies together since we were little. He’s not easily impressed, but he was so impressed by their harmonies — it was the first time we’d heard anyone, other than the Everly Brothers, where we couldn’t tell who was singing at any given time, even though they don’t sound similar to one another. The harmonies are so clever that you can’t predict the note that’s about to be sung next.

I met the Indigo Girls when I was about 17. I had a friend drive me to Portland [Oregon] in the pouring rain, because I had won a contest to meet them before a radio show. I took my first and, at that point, only guitar with me, which was this shitty little beat-up Ovation knockoff called an Applause. I met them, and they signed it. And I remember leaving so unsatisfied, I was like, “I have this signature, but I need to be friends with them. I need to get good enough to where they’re going to hear my music, and they’re going to like me.” And so the very first thing I did, once I gained any notoriety at all, was find a way to reach out to them and tell them I was making a record with T Bone Burnett, and that I wanted to sing with them, and they agreed. I flew down to Atlanta and had one of those crazy, mind-blowing, surreal things happen, where I wound up in the studio with them and was at their house having dinner.

They didn’t work in the studio the way I thought they would. I remember T Bone Burnett telling me — and I don’t know how much of this is true or not — but he said that with the Everly Brothers, neither one of them knew they could sing harmony. They basically both always thought that they were singing the melody no one knew, and that’s why the Everly Brothers’ harmonies are so creative. Well, with the Indigo Girls, Emily sings harmony — she can pick out a harmony from anywhere. But when Amy harmonizes, she kind of has to believe somewhere that it’s a melody, that the note that she’s about to sing isn’t influenced by the other singer. It’s a really fascinating thing to watch. 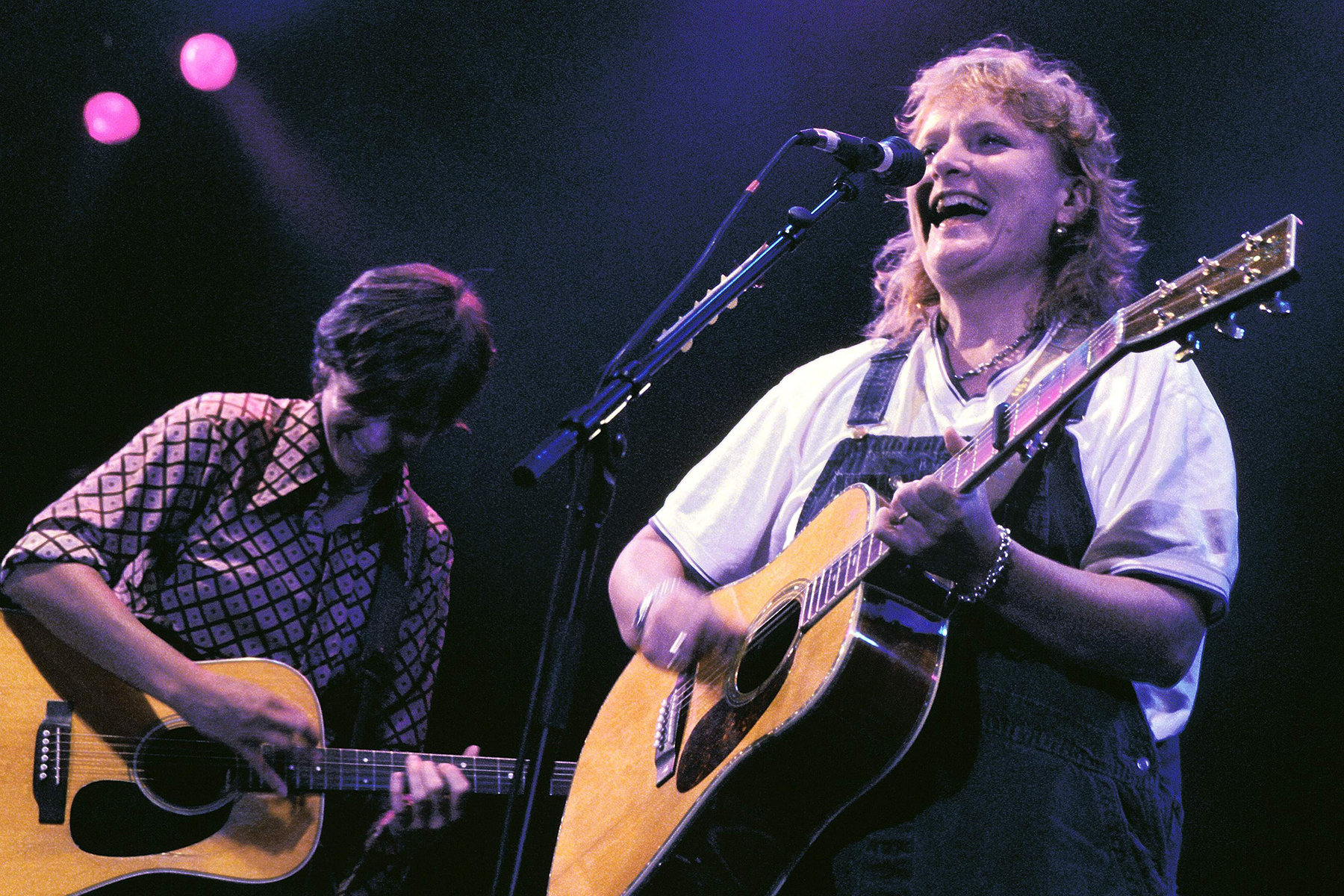 When I opened for the Indigo Girls on tour, it was the first time I had the exposure to what would be known as a “cult audience.” They haven’t just gone to major markets and played Chicago, New York, Boston, San Francisco. They’ve gone to Door County and Fish Creek, Wisconsin. They take their music to the people. They play in places that don’t always have music. They’re true evangelists, in that sense, and they taught me to venture off the beaten path while touring. The fans had an affection for them that was different than for other artists, because you’re seeing the result of a loyal fan base that is behind artists based on the fact that their music has improved their lives. It’s different than a kind of pedestrian fan-artist relationship. I knew at that point that I wanted that relationship. I was only 23 then, and I’m about to be 40 now, and that was a really, really important thing for me to realize.

I think that the fan base also recognized that the Indigo Girls were a revolutionary, legendary musical duo that have delved into areas of production, harmony, vocalization, musicality, rhythm, that so few people have done, and have been at times in their career utterly rejected by mainstream music and the press for their queerness, and just their lack of adherence to gender and traditional understandings of what they should look like and how they should be. That galvanized me towards them wildly. I’m just like their other fans — I never would have missed a show, and there’s not a deep album cut I don’t know.

The second thing I learned on tour is that because I had fallen in love with their music so young, their intertwining harmonies didn’t confuse me. And I knew there was a third harmony, because I’m good at finding harmonies. So they started having me do the harmonies on one or two of their songs. By the end of the tour, they’d do 24 songs, and I’d be on stage for 22 of them. It was really fun. I became, like, the third Indigo Girl.

We’re very close with each other — we have a family relationship now. They know all about my origins as a little baby lesbian who was obsessed with the Indigo Girls. Those women are so different, and they’re so spectacular, but they have this unspoken agreement that their souls have made to cast their lots together. But to maintain their [own selves] is something that everyone in a band could learn from, and everyone in general could learn from. How do you truly connect to another person on a soul level, but maintain yourself?

And with Amy, there are times in my life where I’ve been very close to Amy, and to her family. And sometimes, I’ll open my mouth and Amy Ray’s actual voice comes out of my mouth, and there’s nothing I can do about it, the influence is so permeating.

For a queer person like me, I realized that my path would have been so much more rife with rejection and parody if the Indigo Girls hadn’t taken those hits for me.

I’ve developed kind of an indignant-meets-forgiveness ideology about moving forward, because the Indigo Girls have been blatantly rejected by the mainstream mechanisms and machines. They have been parodied and laughed at in ways that Simon and Garfunkel never would have been, no matter how ridiculous they’ve been over periods of their lives. The Indigo Girls have always maintained a sense of dignity, pride, activism. They’ve overcome every time, and for a queer person like me, I realized that my path would have been so much more rife with rejection and parody if the Indigo Girls hadn’t taken those hits for me. I feel a big responsibility to evangelize about how much of the way they have paved, and how important their music-making still is to this day. Because they’re still creating incredible music, and they’re exciting people that have no animosity and no resentment towards the machine that they’ve worked on the fringe of for all of these years. They’ve watched people like me reach the heights and achievements that I’ve reached because of them, and they’ve never asked for credit, but they deserve it.

My gateway drug to the Indigo Girls was Swamp Ophelia, so when my daughter is 14 or 15, I’m going to play her Swamp Ophelia. I don’t care if she’s gay or straight, or an activist, or a pacifist, or whatever she is, she’s going to find something. She’s going to find something mystical and feminine in that album, and that is something to be proud of. That’s not something to laugh at anymore. And there’s so much more — 1200 Curfews, the live box set that they put together. Their documentary Watershed and their work to honor the earth, their constant and tireless defense of indigenous communities.

It’s also really important to know that when I was a kid, the Indigo Girls held a poetry contest. You entered this poetry contest if you were in high school, and if you won, if you were picked top of your school system, they would come to your high school and play a show. And they were banned by almost every high school that they chose in the South. There would be school meetings that would say they couldn’t come to the school. And the kids, they would do walkouts because the Indigo Girls were banned from their schools. If they were doing that kind of thing now, it would make international news — and this was a way, way more difficult time for queer people.

Finally, I love that they’re moms now. They’re such punk rockers, and they have this incredible tenacity that just amazes me, and the fact that we now sit around and give each other mom tips is the coolest. It’s the full-circle queer experience coming to a place that just makes me really proud to be their friend.