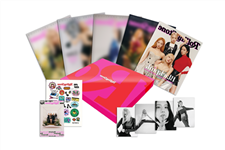 Attention Blinks: after years of asking for it, Blackpink are finally on the cover of Rolling Stone.

Our June 2022 issue features the four-piece girl group and international pop sensations on the front cover of Rolling Stone, alongside an in-depth article that sees Jennie, Jisoo, Lisa and Rosé giving one of their most personal and revealing interviews ever.

From their early days as trainees, to the tight bond they’ve formed over the last half-decade of success, the group speaks openly about the journey they’ve been on and how they hope to grow and evolve – together – in the years to come.

The new cover is also groundbreaking in more ways than one: not only does it mark the first time Blackpink have been on Rolling Stone’s cover, it’s also the first time any girl group has appeared on the magazine’s cover since Destiny’s Child in 2001. Blackpink are also just the second all-Asian act to appear on our cover, shot by Korean-born fashion photographer, Peter Ash Lee.

As one of the biggest groups in the world, Blackpink have won over millions of fans and critics alike with their infectious anthems, uplifting lyrics and larger-than-life personalities. When it came to featuring the group in Rolling Stone, we knew we had to go just as big, which is why we are excited to present our Collector’s Edition Box Set featuring Blackpink.

Think of this box set as a “bonus cut” of our time with the group, with extended interviews, beautiful photography and original artwork that you won’t find anywhere else.

The box includes a copy of the June 2022 issue of Rolling Stone featuring Blackpink on the cover plus four individual copies of the same issue with a solo cover of each member.

The box set also includes an exclusive Rolling Stone 44-page zine with an alternate group cover and individual interviews with Jennie, Jisoo, Lisa and Rosé, alongside images you won’t find anywhere else.

Everything comes packaged inside a custom box designed specifically for this release.

The special set is only being released in small quantities, and is expected to sell out quickly. While the Blackpink group cover is available on newsstands, the individual covers will only be available as part of the boxed set. Each issue was printed specifically for this special-edition release.

Whether you’re a longtime “Blink” or just a fan of good music, we hope you dive into this special box set and enjoy the stories, photos and memories for years to come.

The Rolling Stone Collector’s Edition Box Set featuring Blackpink is available for $129 exclusively through the Rolling Stone shop. Pre-order on shop.rollingstone.com to reserve your copy now.

This product ships worldwide. Free shipping to the US. This is a pre-order item and will begin shipping in the first week of August.