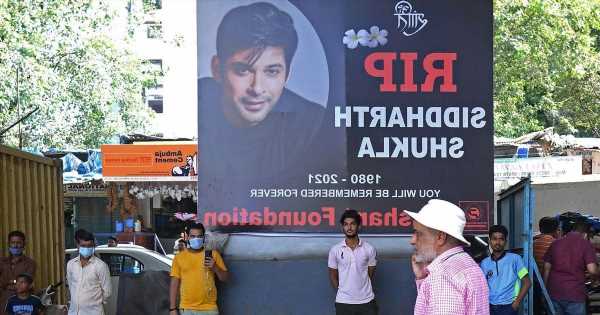 The the Indian actor was rushed to Mumbai’s Cooper Hospital but was pronounced dead on arrival.

A hospital official said: “He was brought dead to the hospital some time ago”.

The initial report cited cardiac arrest as the cause of death which was confirmed in the post-mortem report, and medical examiners have retained samples to figure out what led to the fatal event.

According to sources close to the reality TV star, he wasn’t feeling very well when he got home last night, and it seems he suffered the heart attack in his sleep.

Sidharth reportedly died in his bed next to friend and fellow Bigg Boss contestant – and rumoured girlfriend – Shehnazz Gill, who was unaware of the tragedy until she woke up.

Sidharth first rose to fame as a model before carving out a successful career as an actor and TV personality.

The hit reality series made Sidharth a household name in India, but he also appeared in other popular shows like Balika Vadhu and Dil Se Dil Tak.

The actor also starred in a couple of films after making his Bollywood debut in 2014’s Humpty Sharma Ki Dulhania, and eventually went on to host TV shows such as India’s Got Talent.

Sidharth was cremated this morning at the Oshiwara crematorium in Mumbai, where friends, family and colleagues turned up in droves to pay their tearful last respects on a rainy day.

Shehnazz appeared inconsolable at the cremation as Police escorted her through a huge crowd of mourning fans.

Friends have gathered on social media to share their heartbreak. Posting a picture of her pal, TV actress Kamya Panjabi penned: “You broke millions of hearts, Sidharth. How will you rest in peace knowing so many people are in pain?”

Fans too have expressed their sadness. One said: “This loss is so shaking and unbelievable.

Sidharth is survived by his mum and two sisters.